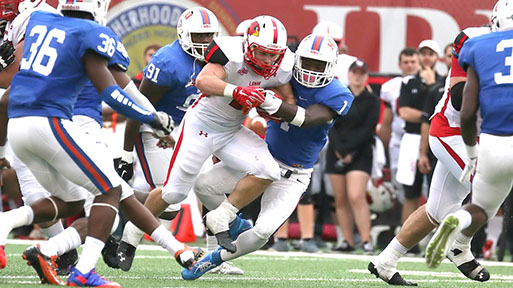 HOUSTON — Lamar junior running back Kade Harrington set a new school record for rushing yards in a season and consecutive 100-yard rushing games, and the Cardinals’ defense surrendered only seven points as LU defeated Houston Baptist, 55-7, Saturday afternoon at Husky Stadium. The victory moves the Cardinals (4-4, 3-3 Southland) back to .500 on the season, while the Huskies (2-7, 0-6) remain winless in conference play.

“After the last two weeks, we really needed to come out here and play well. Our guys did that today,” said head coach Ray Woodard. “I understand that Houston Baptist is a young program, but our guys really played well today. We have to continue to get better because we still have some big games left to play.”

Harrington, whose play earned him the Twitter hashtag #ArKADE, has 1,550 rushing yards this season, breaking the old mark set by Burton Murchison in 1985 by 3 yards. Lamar has three games remaining.

The Cardinals defense was dominant from the opening kick, surrendering only seven points and 233 yards of total offense. LU didn’t allow a first down until the 2:13 mark of the first quarter. Even when the Huskies were able to move the ball in the second half, both drives ended with an interception in the red zone: the first coming from DaQuan Stewart, followed by freshman Davon Jernigan’s first career pick. It is the second time this season the Cardinals have held an opponent to single digits.

“We really played well against the run,” said Woodard. “We put them in passing downs and didn’t give up anything over the top. We cut down on the number of mistakes this week as well. I thought our defense understood why we weren’t playing well, and what we needed to do to correct it. They put in a good week on the practice field, and it was good to see it pay off today.”

LU racked up 568 yards of total offense on the day, including 324 on the ground. Senior Joe Minden completed 11 of 18 passes for 208 yards and three touchdowns. Junior Carson Earp saw his first action since suffering an injury at Southeastern Louisiana. Earp completed two of his three passes, and carried the ball eight times for 86 yards.

“With Kade (Harrington) having such a good year, they did what we expected them to do,” said Woodard. “We thought they would stack the line with a lot of people. Our quarterbacks were going to have to keep them off of us. Joe (Minden) really worked hard this week, and did a great job. That is what you expect from your seniors.”

Led behind the strong defensive effort, the Cardinals were able to jump out to a 34-0 lead over Houston Baptist. LU held HBU scoreless for the first 29:19 of the game. The Cardinals also held HBU to 100 yards of total offense in the opening 30 minutes, while LU was effective moving the ball on the ground and through the air finishing the half with 408 yards of total offense.

LU didn’t waste any time getting on the scoreboard as Harrington caught a Minden pass and carried it 29 yards for the first score of the game. The score remained 7-0 for nearly 10 minutes until Minden found Brown for a 29-yard score. Brown’s reception highlighted an eight-play, 76-yard drive that took 2:36 off the clock.

The Red and White took advantage of sophomore Alex Ball’s strong leg to add to its advantage in the second quarter. He booted a career-long 49 yarder followed by a 27-yard field goal to give the Cards a 20-0 lead.

Both Harrington and Brown added another score before the half ended. Harrington’s came on a 27-yard run to cap a six-play, 48-yard drive with 4:52 remaining in the half. The Cards were back on the march two minutes later when Brown caught a 45-yard pass from Minden. The TD catch came on the second play of the drive.

The Huskies closed out the half with a late score when backup quarterback Tony Dawson scampered 34 yards for a touchdown. The score capped a seven-play, 75-yard drive with 41 seconds remaining in the half.

The Huskies never mounted a serious challenge in the second half, as LU added three more scores. The first came from senior Seth Ellis. He hauled in an HBU punt at his own 27-yard line and took it the distance for the score. Harrington added his third touchdown of the afternoon with a nine-yard scamper at the 5:23 mark of the third quarter. Harrington finished the day with 30 rushes for 192 yards and two touchdowns. He also caught two passes for 43 yards and a score.

LU tacked on one final score when Earp took the ball around the right side for a nine-yard TD run.

The Cardinals return to action Nov. 7, when they return home to host Nicholls State. The game against the Colonels is slated to begin at 6 p.m. at Provost Umphrey Stadium.