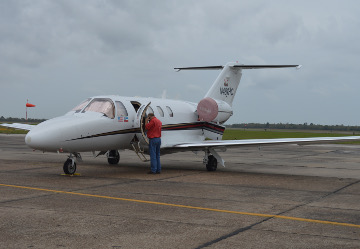 A Mississippi woman returning home following a memorial service in the area is safe after the private plane she was traveling in was forced to make an emergency landing Friday afternoon.

The Citation Jet had taken off from the Jack Brooks Regional Airport and was forced to turn around when the plane began experiencing possible engine problems.

The lone passenger, Sarah Cheek, had flew into the area for a memorial service on Friday and was returning back home to Kosciusko, Mississippi, she said.

“We were about to go back and had to turn around,” Cheek said from a seat inside the Jerry Ware terminal. “The cabin smelled funny and the air conditioning went off. I prayed very hard.”

The plane was piloted by Scot Miles whom she said had “been flying for years and years.”