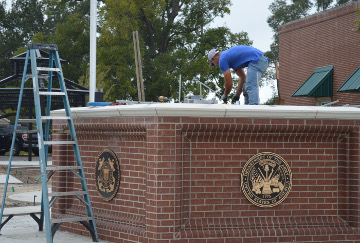 T.J. Pierson with Jefferson Electric Company Inc. works on lighting that will shine on plaques at the Nederland Veteran’s Park adjacent to city hall on Friday. Mary Meaux/The News

NEDERLAND — Work continues on Nederland Veterans Park with hopes of completing the project by late spring or early summer.

Workers have been busy with a gazebo and central monument with panels in the land adjacent to Nederland City Hall on North 12th Street and Atlanta Avenue. A new piece will be added to the park — a statue of a soldier.

“We were approached by an anonymous donor wanting to help cover the cost of the statue,” Nederland City Manager Chris Duque said. “Once we knew it was a possibility w moved along with plans for the statue now versus waiting until the next budget year.”

The donation of $17,576 will cover the cost of the statue that will be placed on top of a pentagon shaped monument. The city will be responsible for the remaining cost of the project that ultimately will come from the city’s Parks Special Fund.

“It will take several months to finish the work and won’t be ready for the Veteran’s Day ceremony in November,” he said. “Hopefully it will be ready by late spring or early summer.”

Nederland Councilmembers will consider an ordinance amending the 2015-2016 fiscal year budget to reflect the project and consider approval of the purchase of the statue.

A Veterans Park Committee, headed by councilmember and military veteran Talmadge Austin, and consisting of members Andy Arnold, a detective and veteran, Mike Tarver who was involved in the monument at Tex Ritter Park in he early 2000’s, Emma Lou Sheen with the American Legion and Capt. Jerry Kelly of the Southeast Texas Veterans Service Group, worked together on the design of the park.

Duque said the vision for the veteran’s park came after a Veteran’s Day ceremony when he and Angela Fanette , parks and recreation director, discussed the issue. Soon a committee was formed.

“We want to make sure to follow their lead as far as what they felt is an appropriate way to honor our veterans,” he said. “This is something we felt we needed to do.”

Victoria Klein, director of library services, is heading uo the Veterans History Project and is busy compiling information including photographs, copies of services records, letters, diaries, videos and audio recoding on veterans from the American Revolution through present day.

The second phase of that part of the project will be packaging the information into a technology-friendly format that enables viewers to search through individual profiles prepared for each veteran in the database.

The goal of the Veterans History Project is to install a kiosk at a late phase for visitors to search through at the park.