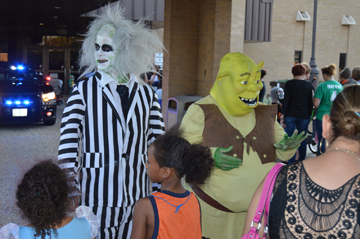 Perhaps it was the threat of rain Saturday, or an epidemic of sweet tooth attacks on hundreds of children, but for whatever reason, lines were extra long at this year’s Trunk-r-Treat celebration.

Children dressed in their scariest Halloween costumes stood in line beside cartoon characters with their parents while waiting their turn to fill pumpkins with candy at the annual event sponsored by the Port Arthur Police Department.

For many waiting in a line that started at the Robert E. “Bob” Bowers Civic Center door then snaked around to the back of the building, the wait was long.

“This was easily the biggest turnout we have ever had,” Port Arthur Police Officer Rickey Antoine, said.

Surveying the long line, Antione said it was good to see so many attending the holiday event.

“It is really a positive thing that the community has responded to our request for a safer venue for children to trick-r-treat,” Antoine said.

Thea Eglin 56, of Port Arthur brought her two grandchildren to the Trunk-r-Treat for the first time this year.

“There is a lot of people here, but it is worth it for the children,” she said. “We thought it might rain Saturday, so we were sure to come tonight, but would probably have come anyway.”

Inside the Civic Center, various booths representing groups as varied as Valero to the Ladyz of Love women’s civic club passed out candy to the children, while enjoying the night themselves.

Francis and Allen Valka, owners of Opie’s Towing, and those at their booth dressed as Avengers Thursday.

It was the group’s first time to participate.

“We are really excited. So far, its there’s been a really good turnout. I am just afraid we might run out of candy,” Francis Valka said. “We are really enjoying the kids dressing up.”

Christe Whitley, assistant in the Port Arthur Mayor’s office, said those at her booth were also enjoying watching all the kid’s in their Halloween costumes.

“Its always a good time,” she said. “So far, the best costume has been the bleeding pumpkin.”

Outside, Bree Bertrand, 21, of Port Acres waited toward the end of the line with her two young children 2-year-old daughter Bailey and year old son James.

“I did not think it would be this crowded when I got here. If I’d known I would have got here earlier,” she said.

Bertrand said Saturday’s prediction of all-day rain factored into her decision to bring her young children to the Civic Center.

“With the rain forecast, we just don’t know what we’ll get to do on Halloween, so we’re going to try to wait it out here. We may just be staying at home all day Saturday.”

Henderson vows to work toward improved PA quality of life

If the residents of Port Arthur’s quality of life is improved, the city should improve accordingly. That’s what Thomas... read more