Henderson vows to work toward improved PA quality of life 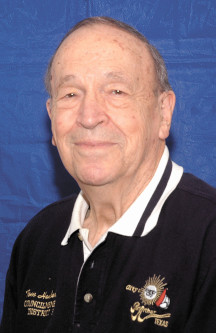 If the residents of Port Arthur’s quality of life is improved, the city should improve accordingly.

That’s what Thomas J. Henderson has focused on in previous years of public service, and he has a record to prove his belief that the two go hand-in-hand.

Henderson, 88, is a candidate for the at-large Position 7 City Council position in Port Arthur.

“The issues I have always concentrated were quality of life issues, a cleaner city, better streets, making sure all of our utilities are working right,” Henderson said. “That is what attracts people to your city. If they see piles of rash, other things that are unsightly, they think ‘I will move to Groves or Nederland.”

Henderson knows fixing city streets will be costly. For years the city has allotted enough funds to basically do a patch job on its streets, but more is needed.

To raise money for streets, Henderson would like to see a proposition on the May election ballot to sell $5 million in street bonds.

“Money is cheap right now. You can borrow money cheap, so I would try to get that proposition on the ballot in May,” he said.

Henderson believes the forensic audit the city is about to embark on is needed, if for no other reason that to ease citizens’ minds.

Though he’s been off the board for four 4 ½ years, Henderson said he has watched continued efforts to revitalize the city’s downtown, and feels there may be too much concentration of effort on the lofty project.

“One of the things I am not in agreement with is we are concentrating too much on restoration of the old downtown area,” Henderson said. “You have to ask if it will make things better for citizens. Will they go downtown to shop? I think not.”

During the time he has been off Council, Henderson said he has noticed discord among members.

If elected, Henderson believes candidates should be limited to five minutes when discussing anything controversial.

“If you have a really controversial subject, when you talk too long it can repetitious. One person will speak, then someone will take up the same subject and say the same things,” he said.

Henderson is a graduate of Jasper High School. He moved to Port Arthur in 1946 to attend Port Arthur Business School, which is now Lamar State College – Port Arthur.

He is a World War II veteran, having served in the U.S. Navy.

Henderson retired from Texaco, where he was supervisor of computer operations in 1983.

Most recently, Henderson has served on the city’s Charter Change Committee, and is involved in the Griffing Park Neighborhood Watch.

He is a member of First Baptist Church in Port Arthur.

Henderson and his wife Peggy have three children; one deceased and two living. They are grandparents to four grandchildren and have four great-grandchildren.