Down to the wire: Memorial, WB left with little time to clinch berth 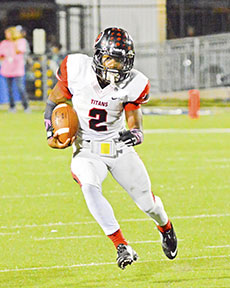 The Port Arthur Memorial Titans are in a spot any team would like to be with two weeks left in the regular season.

Memorial controls its own destiny, even with a 1-3 District 21-6A record.

The Titans take on the West Brook Bruins at 7 p.m. at the Thomas Center. Tonight is West Brook’s final regular season contest as the Bruins enter the game 6-3 overall and 3-2 in the league standings. Memorial ends its regular season next week at home against North Shore (5-3, 4-0).

Channelview is also fighting for the playoffs with a 2-2 district record. The Falcons face Baytown Sterling this week.

“We understand there are three teams with two slots left open,”

Memorial coach Kenny Harrison said. “Only North Shore and La Porte have clinched a spot. As long as there is a window of opportunity, we are going to approach it day-by-day. We are going to work extremely hard to take care of our part.”

Memorial and West Brook have formed as close a rivalry as the two can get in the district schedule, since they are the only local 6A teams.

“We have had some battles over the years,” Harrison said. “We have won some and we have lost some. I don’t expect anything different. Our kids and the West Brook kids grew up playing football together in Pop Warner and then to middle school. It is closest thing we have to a rivalry we have in the 6A level. I am looking forward to a good game.”

Junior running back Joel Denly has burst onto the scene this year and has 1,195 yards on 212 carries with 16 touchdowns.

Senior quarterback Justin Essex leads the district with 1,850 yards with 10 touchdowns and five interceptions. His favorite receiver all year has been Keith Corbin, a University of Houston commit who has 886 receiving yards on 44 receptions with nine touchdowns.

“They have seen us a lot this year because they follow us in the district schedule,” Harrison said referring to how the Bruins play district opponents the week after those teams face the Titans. “They have had an opportunity to watch us all year long.

“We told Kary Vincent he is going to be busy this week. He is our best cover guy and they like to get the ball to Keith. When you have a situation like that, you put your two best players out there and hopefully for us Kary can win that battle and take Corbin out of the game.”