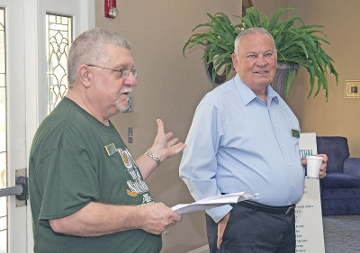 Groves Chamber of Commerce Executive Director Ronnie Boneau, left, introduces Gene Venable, president of the Groves Pecan Festival Committee and a member of the chamber board, during a kick-off event for the Festival at Magnolia Manor on Wednesday. Roger Cowles/The News

GROVES — Organizers and supporters of the Groves Pecan Festival were on hand for an early morning breakfast and fellowship at Magnolia Manor on Wednesday.

The purpose, to kick-off the upcoming festival that will be held from Nov. 5 through Nov. 8. 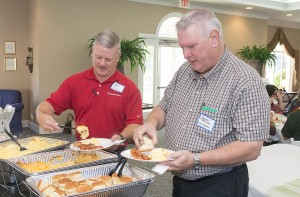 Gene Venable, president of the Groves Pecan Festival Committee, is excited about the new dates and the new carnival company coming in.

Venable explained that employees with Lowery Carnival Company wear uniforms, undergo background checks through their employment and all of the rides have been inspected by the state.

Committee members have heard comments from the public regarding the new dates which coincide with opening day of hunting season.

“We have to be careful when moving the dates and plan around school activities,” Venable said, adding they also had to find the right carnival to fit the time frame. “Everyone is thrilled we are moving the dates to the fall. It will be cooler weather and we’ll be out of hurricane season.”

Venable said the committee is always open to suggestions on how to make the festival better as well as seeking volunteers.

We’re excited,” Venable said. “I can’t wait for the festival to get started.”

Ronnie Boneau, executive director of the Groves Chamber of Commerce and Tourist Center, welcomed the guests and gave a run-down of the upcoming line-up.

So far 16 women who are former pageant queens have signed up to attend take part in the parade which is scheduled for 9:30 a.m. Saturday, Nov. 7. Line-up will begin at 8:30 a.m. by entering from Terrell Street onto Cleveland Avenue.

This year’s Pie Eating Contest, which is set for 1 p.m., Saturday, Nov. 7 at Lion’s Park, will feature two tables — one for youth and one for adults.

“If you’ve never seen the pie eating contest, you need to see it,” Boneau said. “It gets real serious. Like a horse race, they take off fast with their face in the pie.”

Other events include a horseshoe tournament, Cooking with Pecans Contest and pet show.

Live entertainment will be provided by Jude Moreau and the Bon Temps Playboys and David Joel Band on Friday, Nov. 6, and Lamar Jazz Band and Champagne Room on Saturday, Nov. 7. Various school choirs, dance academy’s and others will also perform throughout the event.

The annual treasure hunt begins Monday, Nov. 2. Clues will appear on the Groves Pecan Festival Facebook page at 7 p.m. Monday through Saturday with clues running in the Port Arthur News all week long. Clues will also be posted in the Chamber of Commerce porch window beginning at 7 p.m. Monday.

Hunters can find daily golden pecans worth $50 and a grand prize of $400. 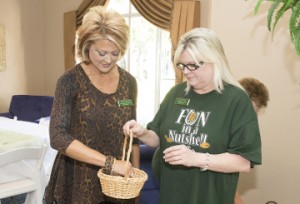 Tonya Petix, president of the Groves Chamber of Commerce and Tourist Center, left, picks a ticket for a door prize along with Debbie Snell, administrative assistant with the chamber, during a kick-off event for the Groves Pecan Festival at Magnolia Manor on Wednesday.
Roger Cowles/The News