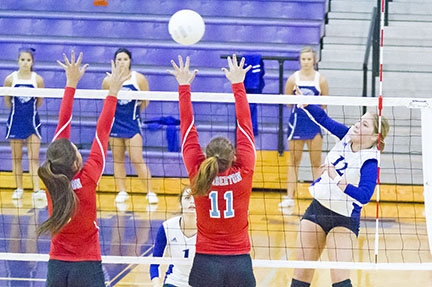 Libbie LeJeune and the Rock-A-Noos face Beaumont Ozen at 6:30 p.m. at The Reservation.

The Port Neches-Groves Rock-A-Noos season comes down to one more match.
PN-G and the Beaumont Ozen Lady Panthers square off at 6:30 p.m. at The Reservation. The winner clinches the final playoff spot out of District 22-5A while the loser is out.
The two teams finished the regular season tied for third with the Lumberton Lady Raiders. Lumberton won a coin flip between the three coaches and faces the winner of PN-G/Ozen Friday to determine which squad gets third and fourth in the playoffs.
PN-G has not missed the playoffs since 1982. The Rock-A-Noos swept the Lady Panthers this past Friday to pull into a tie with Ozen. All three teams finished with 8-6 district records.
The Rock-A-Noos (22-15) lost to the Lady Panthers (27-11) in the first round of district after winning the first two games and losing the next three.
Goose Creek Memorial (14-0) won the 22-5A championship and only lost two sets the entire march to the title. Nederland finished 12-2 and in second place.

The youth-only season for whitetail deer takes place Saturday and Sunday throughout Texas. The purpose of these youth-only hunts according... read more