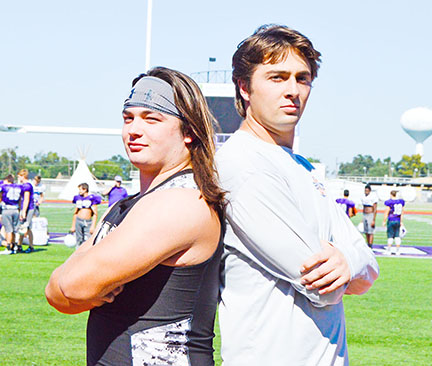 Langston brothers cherishing moments on the field together

PORT NECHES — Two Port Neches-Groves Indians sometimes get in arguments.
There are times their mother and father are half worried about how physical the arguments can get.
Oh, brotherly love is special.
Christian and Justice Langston have a bond unlike any other on the Indians roster.
What makes the two unique is both Christian and Justice start on the varsity team. Senior Christian is on the defensive line and Justice is the starting center as a sophomore.
“Now, they are fantastic together,” Amy Langston said. “They are like best friends. Then, there was a spell a few years ago where I wondered if they would hate each other. Christian brutalized Justice.”
This is the year the Langston family has waited on, the first time the brothers have been on the same football team.
“I always thought it would be a special occasion,” Christian said of playing on the same team as his younger brother. “I don’t think that gets to happen very often. It is a special feeling. I feel like I have gotten to know my little brother a little more since he has been on varsity. I get to see him all the time. I see him a lot more if he was on JV.”
Justice has also enjoyed this year, even though he is sometimes the butt of jokes started by his brother and his friends around the locker room.
“It has been a great experience,” Justice said. “We have never been on the same team until this year. We have had a great year. He was on varsity last year. I learned from him how to carry myself and how to improve my work ethic. Overall, he has helped me a lot and I hope I have adjusted well.”
The game of football is nothing new to the Langston family. The brothers’ father is Chuck Langston, offensive coordinator at Lamar University. He played at Beaumont West Brook and then earned four letters at Oklahoma University. Langston played in three bowl games.
One would think with a busy schedule with the Cardinals, Langston would have a hard time catching PN-G games but that has not been the case.
“It has been a really special year for our family,” Chuck said. “We have really enjoyed it. I have the best boss in the world in Ray Woodard because I think I have missed only one game. He feels I need to be at my boys’ games and said he doesn’t know why I wouldn’t be there to watch them.
“They still argue but it has been great to see them get along as they have grown. It is special to see them stand by each other during the National Anthem.”
Before the two got back to enjoying being around each other, Justice admits there were times Christian was the typical older brother.
“Always in the locker room, there are times I get made fun of,” Justice said. “I have been around these guys since seventh grade. They are great guys but you get used to getting picked on a little bit. You just have to embrace it and laugh with them. I have learned that over the years. It has been fun.”
Christian agrees there are times when he has to remind Justice he is the little brother.
“Everyone has to do that,” Christian added. “One time we were in two-a-days and I gave him a good hit. I really enjoyed that.”

NEDERLAND — The wait is over for the Lamar Cardinals. Nederland senior running back Austin Krautz announced Wednesday his intentions... read more