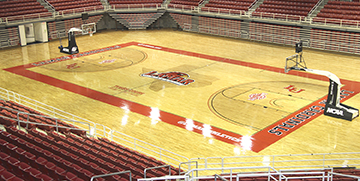 Tubbs Court at Lamar University’s Montagne Center has been repainted. The new backboards have been shipped from Syracuse, New York, where they were used during last season’s Syracuse Regional of the NCAA tournament. (Lamar sports information)

BEAUMONT — In another week, Tic Price may have a better idea how his Lamar men’s basketball lineup will shape up.
“We get after one another every day,” senior forward Dontavious Sears said. “He can start anyone on the team. We have like 10 starters, two groups.”
Next Tuesday is when Lamar will play its Red-White game on the newly repainted floor of the Montagne Center. The university officially released a photo of the design Tuesday.
“It’s really done with a lot of class,” Price said. “We really like the floor. … It’s really tremendous for our guys this year, but it makes a statement with our recruiting. It helps us when we bring a young man in, they see this new floor, these new goals [backboards].”
The backboards were shipped from Syracuse University, which hosted an NCAA regional last season. They replaced the original goals used when the Montagne Center opened in 1984.
Price said he had no input on the design. “All I do is coach the team,” he said.
In constructing his lineup, Price has to find an offensive corps that can replace the Cardinals’ top three scorers from last season, all of whom completed their eligibility. Anthony Holliday, Tyler de Lattibeaudiere and Donovan Ross combined to account for more than half of Lamar’s 71.5 points per game, helping the Cardinals build an 11-win turnaround from the season before, when Price took over with five games remaining to replace the fired Pat Knight.
Sears averaged 7.1 points per game last season but did not start a game. He said he’s up for the challenge of leading a team that includes only three one-year lettermen and eight newcomers and one-letter sophomores.
“We’re jelling pretty good,” recent Port Arthur Memorial graduate Dorian Chatman said. “To me, it was surprising, quicker than I thought. We came in during the summer as a family, and the only difference between college and high school is the consistency and effort and hard work. Coach Price preaches that every practice.”
Chatman has already been honored without having stepped foot in an actual college game. College Sports Madness named the forward its Southland Conference Preseason Freshman of the Year.
“He’s been very impressive in the preseason,” Price said. “We think he’s a very gifted athlete who’s got the ability to go inside and out. He’s got a high basketball IQ, and he’s been bringing it every day. He’s got a chance to have a very good career here at Lamar University.”
The 6-foot-6 Chatman was the 16th-ranked high school player in Texas while at Memorial and enjoyed a successful AAU season, which Price said helped Chatman win the preseason accolades.
“He opened up a lot of eyes during the summer,” Price said. “And so the expectation is there. He’s got to deliver.”
It may be no surprise when Price does solidify his lineup that sophomore Kevin Booze will run the point again for the Cardinals. He started 13 games last season and earned two Southland Player of the Week awards while averaging 6.2 points and 3 assists an outing.
“We threw him in the fire at a very, very crucial time during the year last year,” Price said. “He responded some times. Like a typical freshman, he had some ups and downs. But he’s tough-minded and maybe one of our better defenders, as well as he’s improved his jump shot over the summer.”
Lamar will begin its season at home Nov. 13 against Austin College of Sherman.