One cool October day, I held hands with two other little girls, and walked up the tall steps to my first day of school. I was 4, and was excited to get to spend the day with my “Baboo,” who taught first grade at Pennsylvania School. She was carrying a brown paper bag, and, under one arm, a large, round pumpkin.

Children of all sizes crowded around us, asking her “Why are you bringing that to school?” In her classroom, she placed it on her desk, and after they were all out of their coats, and in their seats, she introduced me to them, and their day began.

After lunch, there were many hands up, asking, “Ms. Caswell, what’s that pumpkin for? What’er you gonna to do with it? ”

At last she cleared her desk, lined it with newspaper, and told them to come and stand around her. They were going to make a Jack-o’-Lantern! The face was quickly drawn on, and she began to carve out the eyes, nose, and at last, a scary smile! All the seeds and pulp were put into a bag. When the face was complete, she put a small candle into the hole, and lit it, making the scary face even better! “This was, many years ago, made to look like a man with a lantern, or night watchman, ‘Jack with a Lantern’,” she explained.

After a few minutes, she asked if they knew what else they could do with the pumpkin. Out of her paper bag, she took a small hot plate, a small pan and some spices. Removing the candle, she began to cut the Jack-o’-Lantern into slices, then scraping the soft insides into the pan, she added some butter, spices and a spoon or two of brown sugar.

As it warmed, the room filled with all the wonderful smells of fall, and the children were wide-eyed to see that they could eat the same pumpkin that was once a scary Jack-o’-Lantern. It was a surprise to them that pumpkin didn’t come in a can, but grew from a vine in a garden. Little spoons were handed out, and we all tasted the warm, sweet pumpkin, a perfect treat, and a good lesson for a cool October day.

Now, many years, and Halloweens later, remembering that day, I wondered why we didn’t see more pumpkin patches in our local gardens, so decided to do a little research.

Pumpkins appear in our area in the fall, beginning in October, but rarely are seen growing in Southeast Texas backyard gardens. To have pumpkins for fall cooking, and Halloween, plant in mid-summer, in rows or hills, depending on how many you plan to harvest; they take a lot of room!

For a small garden, plant in hills, at least six feet apart. Dig a hole 12 to 18 inches deep, and two feet diameter, filling the bottom with four to six inches of compost or good garden soil. Put excavated soil back into the hole to form a mound six to eight inches high.

Hills should be four to six feet apart for bush, or eight to 10 feet for vines. Sow six seeds to a hill, about one inch deep. Thin to the two or three strongest plants when they are six inches tall.  Feed with complete and balanced fertilizer, at monthly intervals, one to two pounds per 100 square feet, and water deeply after feeding, and when soil feels dry, as this ensures good fruit size. Pumpkins should ripen in 100 to 120 days.

In the gourd family, pumpkins are simply a kind of squash. They need a lot of room to spread out, whether on vines or bushes, and should be thinned out and allowed to mature before harvesting. When they have changed color, the vine has dried, and the rind has toughened, cut the vine, leaving at least three inches of the stem to allow for longer storage life.

For a family project, especially for younger children, this is a good way to help them learn to like, and look forward to, growing things that are not only good to eat, but are fun to grow, too. Happy Halloween! 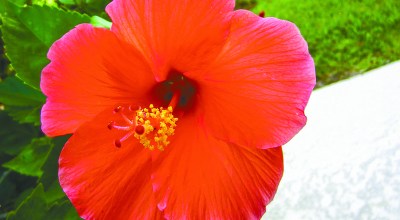 OUT IN THE YARD — Attracting butterflies to the garden

OUT IN THE YARD — Consider container gardening for produce