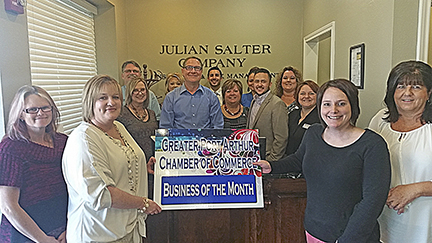 A race car, a drone and Big Arthur have all had Julian Salter Insurance coverage.

The agency has been in the insurance business for 116 years. Stuart Salter now oversees trends and changes, and credits his staff for success.

“They are the ones that make all the money here. I’m just here for comic relief, I think,” Salter said.

The Greater Port Arthur Chamber of Commerce Ambassadors presented the agency with the October Business of the Month award. Salter said it was a nice tribute, because it means people are “good-mouthing” them all over town.

“We ask them, ‘What keeps you awake at night?’” Salter said.

If it’s earthquakes, that gets a check in the low risk box. Hurricanes? Another story.

Maritime Captain Roderick Steele began the company and Salter’s grandfather Julian hopped aboard in 1923. Then Salter’s father, Julian Clayton Salter, came aboard in the 1950s and Salter himself joined in 1985.

Drones are big now in the refinery industry and actually lower the risk of a human doing the same work, such as photography, Salter said.

Big Arthur, the huge crane at the Port of Port Arthur, does an important job in a high-risk situation, so it gets the Salter protection it needs.