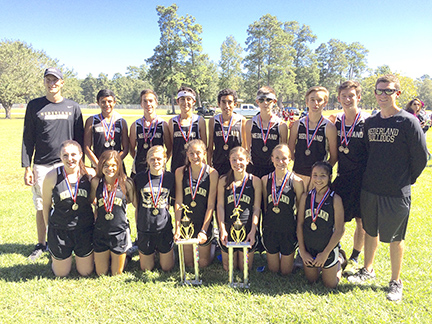 Nederland’s boys cross country team has not finished below first in a district meet since Tommy Oleksy became the coach in 2009.
In fact, the Bulldogs just chalked up their 11th straight championship. And the Nederland girls team took home their third title in four years.
“We’ve got a pretty good system set up,” Oleksy said. “We’re able to kind of locate kids in middle schools and guide some kids who have potential into running. The kids who are older do a great job of being leaders for the younger kids. Our expectations and work ethic gets passed down to the younger kids.”
Nederland continued the championship tradition last Monday in the District 22-5A event at Vidor’s Clairborn Park. Three of its runners, Jace Garrett, Carlos Rodriguez and John Krautz, took the top four in boys individual standings, with Garrett winning district for the second year in a row.
“That’s a very big accomplishment for him,” Oleksy said. “He works very hard and does what we ask him to do. He works hard in summertime. He’s definitely improved this year, and his times have dropped.”
Garrett finished the 5,000-meter course in 17 minutes, 13 seconds, edging Rodriguez by one second. Carlos Barboza (12th) and Jake Moore (21st) also scored for Nederland.
Port Neches-Groves’ Kevin Dietrich, Brock Brennan and Collin Dietrich, in order, took the sixth through eighth places. The top 10 runners individually and top three teams qualify for regionals. PN-G was fourth, behind Nederland, Beaumont Central and Goose Creek Memorial.
Madison Ledet led the Lady Bulldogs’ charge with a runner-up finish and was one of five Nederland runners in the top 20. Her time of 21:18 was just 7 seconds behind Lumberton’s Erin Talley, but it was a great finish after dealing with an ankle injury earlier in the season.
“They were neck-and-neck for the last 50 meters,” Oleksy said of Ledet and Talley. “This is one of [Ledet’s] first races back.”
Rachel Morrison (fourth), Litzy Vasquez (ninth), Lorin Deese (11th) and Haley Plumley (17th) also scored for Nederland.
PN-G did not have a qualifier in girls, but Meryl William and Kattlyn Brown were 14th and 15th, respectively.
Weather permitting, the Region III meet is scheduled for Monday morning at Kate Barr-Ross Park in Huntsville. But rain may not be enough to put the event on hold.
“We’re going to go and hopefully get it done with bad weather,” Oleksy said. “We practice in rain and our kids have every expectation to perform well in rain.”