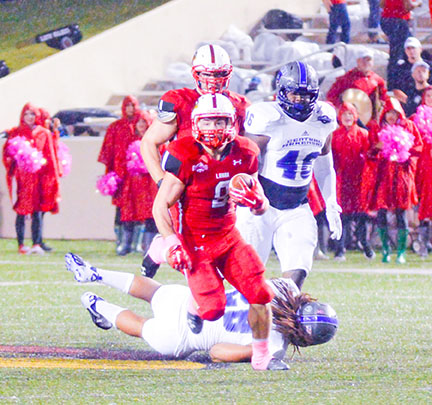 Cardinals break down, give up 292 yards to Veasley

BEAUMONT — The roles were reversed.
An opposing running back was the most dominant on the field in a Lamar football game. It was strange, considering Kade Harrington rushed for 243 yards and two touchdowns on 24 carries.
By the time Harrington found some big holes, Blake Veasley had already done damage — with more damage to do.
The Central Arkansas senior had 292 yards and four touchdowns rushing, and the
Bears sent Lamar to its second consecutive defeat, 35-17, before a sparse crowd of 6,476 in Provost Umphrey Stadium on Saturday night.
“That’s two weeks in a row we’ve wasted a really good performance by Kade,”
Lamar coach Ray Woodard said.
For a team needing a win to maintain hopes of a conference title and an NCAA playoff berth, the Cardinals (3-4, 2-3 Southland) had very little response to the Bears’ blows. The end result left Lamar quarterback Joe Minden, who threw five interceptions, fighting back tears after the game, his eyes visibly red.
“Playing this position, it’s hard, and a lot pressure,” he said after completing 14 of 27 passes for 143 yards. “I feel like I let a lot of people down. It’s a tough game. I don’t know. I expect a lot better of myself, and I didn’t live up to my expectations. I’m emotional because you put so much into the game, and when you don’t accomplish your goals, it’s hard.”
Veasley’s became the first UCA player since 1993 to rush for more than 200 yards since 1993 and set a school record with 49 carries. His performance left a Lamar defense scrambling for an answer to stop the run, which the Bears (4-3, 4-1) did themselves against Harrington in the early going.
“We made it too easy on him running the football tonight,” Woodard said. “Very disappointed by the run defense. “It’s very, very, very, very, very, very hard for me to hit here and say that as a guy who made his living coaching defense and stopping people from running the ball.”
Lamar trailed in Beaumont for the first time this season. Along with the five interceptions — two by Tyler Williams — the Cards had a first-quarter drive end in a missed 46-yard field goal by Alex Ball, ending a 7-for-7 start to the season. Ball did convert a 23-yarder in the second.
The Bears were aggressive on their first scoring drive, following Veasley’s 1-yard TD tote with Scott Matiaha’s two-point carry in opposite direction of the Swinging Gates formation. Bobby Watkins’ pick off Minden set up UCA’s second scoring drive, which ended in a 14-yard Veasley dash to make it a 15-0 game.
The Cardinals’ defense seemed listless early, finding no answer for Veasley and struggling to mount a comeback from their third hole of 13 or more points in the past four games. The host team had the ball for only 2:39 of the second period.
Jace Denker knocked through a pair of 21-yard field goals to close the half with a 21-3 UCA lead.
Harrington could only be contained for so long. The Football Championship
Subdivision’s rushing leader going into the week, he had a 47-yard run that led to
Ball’s field goal, then scored the Cardinals’ first touchdown on a 65-yard sprint, making the score 28-10.
Bear Christianson tried to spark Lamar with his first of two blocked punts, which was recovered at UCA’s 24. But on fourth and 4, Minden tossed his second pick of the game to Williams in the end zone.
Since that spark didn’t happen, it was up to Harrington. He turned in a 50-yard TD run around left end with 1:44 left in the third to whittle the deficit to 28-17.
Lamar got a big defensive stop early in the fourth, but UCA quelled a Lamar comeback when a Minden pass bounced off the helmet of a receiver into the hands of Tremon Smith at the Cardinals’ 22. Veasley capitalized with his final touchdown run of the night from 19 yards out.
Despite all of his efforts, Harrington slipped to second nationally in season rushing yards. Chase Edmonds of Fordham, rushed for 347 Saturday against Lehigh, matching Harrington’s total in Lamar’s previous home game against Abilene
Christian, and now has 1,393 rushing yards to Harrington’s 1,358.
That wasn’t a point of discussion in the press room, though.
“Two consecutive losses,” Harrington said. “It doesn’t feel good. But, this is a strong team. There a lot of high-character guys. I know we’ll bounce back.”

PRUETT COLUMN: Time is right to honor LeVias in Beaumont

Ever since I took over this notepad from the retired Bob West, there is a column note I have wanted... read more