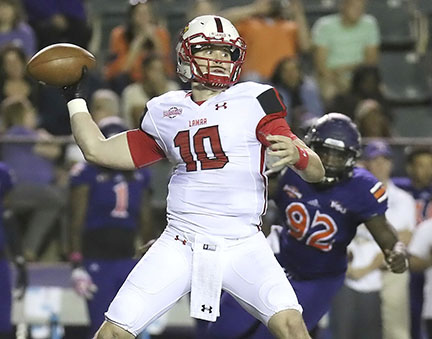 The game was already huge.
Lamar is set tonight to host a Central Arkansas team it has never beaten in four tries, including two losses by a total of five points.
Then both teams slipped up last week in Southland Conference play. Lamar could not dig out of three 17-point holes and lost to previously winless Northwestern State. Central Arkansas, a Southland powerhouse since joining the conference in 2006, ran into another perennial power in McNeese State, losing 28-13 at home.
“They had some opportunities to beat McNeese,” Lamar coach Ray Woodard said earlier in the week. “Two big turnovers for touchdowns.”
Not only are Lamar (3-3, 2-2 Southland) and UCA (3-3, 3-1) fighting to stay in the conference championship race and strengthen their NCAA Division I playoff resumes, but tonight’s game will draw a television audience in addition to those planning to log onto ESPN3.com for the 6 p.m. kickoff. It was announced earlier in the week that the game has been added to the ESPN College Extra lineup, meaning that the game will air on DirecTV channel 790, AT&T U-verse 616 and Verizon Fios 323.
It will be the fourth time this season the Cardinals have played on television, and the fourth time the country — along with a World Wide Web audience — gets to see the nation’s leading rusher, 5-foot-9 Lamar junior Kade Harrington.
He’s rushed for 200 or more yards three times in the past four games, turning in a Southland-record 347-yard effort against Abilene Christian two weeks ago in Beaumont and 282 yards at Northwestern State last Saturday. Harrington also ran for five of his 13 touchdowns this season last weekend.
UCA’s Dominique Thomas is a distant second to Harrington in the conference with 525 yards and four touchdowns, but he still averages 5.1 yards per carry.
If anyone catches Woodard’s attention from the Bears, it’s the entire defensive line, led by Dallas defensive end Derek Floyd, who has four total sacks (two solo, four assisted) this season. The entire defense has held opponents to 96.8 rushing yards per game this year.
“I really like their front defensive line,” Woodard said. “I like their team. I like what they do. Going back to their offense, they’ve got the second-leading rusher in the league and they’ve got two of the top three receivers in the league.”
Yet, it’s quarterback Hayden Hildebrand, the Southland’s second-leading passer in average yards behind Abilene Christian’s Parker McKenzie, who facilitates the offense.
As productive as Harrington has been, Woodard said keeping him fresh is a concern, adding Harrington doesn’t have to take many reps during practice.
“His freshman year, when he had the broken bone in his foot, he would stay in a boot all week and stay kind of mentally in the practice,” Woodard said. “Then he would go out and play well, and we found out he’s not a high-rep guy. He just doesn’t need a ton of touches to be ready to play. So, now in his third year here, if he’s going to run it 35 times, it’s going to be on Wednesday, not on Sunday. The trainer comes to me and says, ‘He’s tired.’ Well, he should be tired.”
Lamar has struggled with starting fast in recent games, falling behind by 13 or more points in its past two road games and starting the scoring almost 11 minutes into the Abilene Christian contest. Woodard is hoping the Cardinals can keep from having to rely heavily on the run game as Joe Minden makes his third consecutive start and fourth of the season.
“Joe or Carson [Earp] or Brett [Cox], whoever’s out there at quarterback, whoever’s out there, has to make the other team pay,” Woodard said, awaiting to see whether Earp will be healthy enough to play after a shoulder injury in the Oct. 1 Southeastern Louisiana game. “We’ve got too talented of a receiver corps to be one-dimensional.”
Earp has started to throw in practice this week, although he hasn’t tried to deliver deep passes.