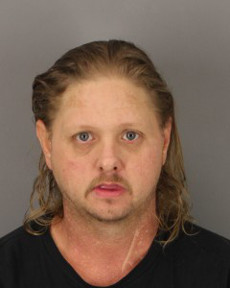 BEAUMONT — A Port Neches man is charged with shooting another man while at a Beaumont motel early Friday morning.

Beaumont Police Department’s patrol officers were able to apprehend the suspect they considered a dangerous shooter quickly, according to a press release from BPD.

Officers were called to Days Inn in the 2100 block of 11th Street in Beaumont’s north end around 3:30 a.m. Oct. 23 in reference to a shooting. When they arrived they found a man suffering from a gunshot wound to the abdomen.

Officers gained a description of the shooter, identified as Todd Ledoux, 43, of Port Neches, and discovered he was still inside one of the rooms.

As officers approached the room, they observed Ledoux attempting to exit.  After giving verbal commands to Ledoux, officers were able to safely take him into custody.

During a search of Ledoux, officers found the weapon they believe to be used in the shooting.  The victim of the shooting was transported to Christus Hospital-St. Elizabeth for immediate surgery due to being shot in the abdomen.

Ledoux was arrested for aggravated assault with a deadly weapon, and transported to the Jefferson County Jail where he was booked.