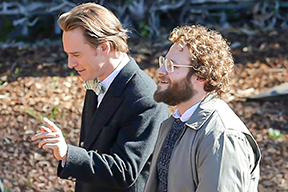 As an unabashed Apple fanboy, I find myself conflicted about the new biography, “Steve Jobs.” The movie critic in me loves that this is a film that features superb acting, assured direction and a screenplay that crackles with energy. On the other hand, the fanboy in me winces at the story that seems to be, at times, a bit of a hatchet job on the Apple co-founder.

Somewhere in the middle of these two conflicting responses to the movie lies the undeniable fact that this is a very good, eminently watchable film.

“Steve Jobs” plays out in the moments leading up to three product launches, with Jobs (Michael Fassbender) preparing to go onstage to introduce the Macintosh computer to the world in 1984, the NeXT Cube in 1988 and the iMac in 1998. Friends and colleagues stop by to wish him well, or to offer their critiques of the products and his life. These emotional conversations play out against the ticking clock of the looming presentations, which makes for three pressure-filled and very entertaining sequences.

The film is based on Walter Isaacson’s biography, but the filmmakers are quick to point out that they have very little evidence about what actually happened in the moments leading up to each presentation, using an artificial story form to create sequences that are meant to illustrate what made the man tick. It is a controversial tactic that has some prominent tech reporters calling for a boycott of the film.

Nevertheless, credit goes to Danny Boyle and Aaron Sorkin for crafting a story that is one of the most intriguing biographies that I have ever seen. Also credit Fassbender for the best performance of his career—he is simply magnetic in the title role. Seth Rogen also does superb work playing Apple co-founder Steve Wozniak. Kate Winslet, Jeff Daniels and Michael Stuhlbarg round out the cast, and they deserve kudos for handling some very difficult acting challenges without ever coming up short.

The only moments that don’t work flawlessly are those constructed around the relationship Jobs had with his daughter, Lisa. The filmmakers push really hard to find core emotional moments in the daddy-daughter relationship, but they don’t ever truly materialize. That’s interesting because Lisa didn’t support the Isaacson book but did agree to help with this movie. At times it feels like her story is being promoted as exclusive content here, even though it’s not really warranted.

Ultimately this isn’t the definitive movie about Steve Jobs, especially as the biography stops well before the release of the iPod, iPhone and iPad. Apple purists will take issue with the portrait of Jobs as a monster masquerading as a tech genius. Still, “Steve Jobs” is a fascinating film, artificiality and all, that succeeds thanks to actors, writers and directors all working at top form to create one of the best, and most intriguing films of the year.