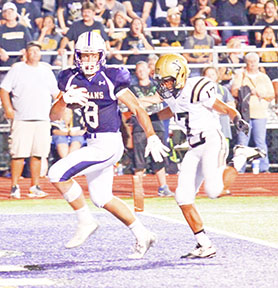 PORT NECHES — There was only one way Brandon Faircloth and the Port Neches-Groves Indians knew how to get over the loss to Nederland — start preparing for the Beaumont Ozen Panthers.

Faircloth admitted it was a tough weekend after his Indians fell 30-27 to the Bulldogs in the Bum Phillips Bowl. When Monday came around, it was back to work.

“The way to get over it is watch the Ozen film,” Faircloth said. “They are really good and talented. It is not hard to move on when you see who you are playing this week.

“There was no hangover. We take one game at a time. We lost on a field goal with [two] seconds to go. It was a tough weekend but our kids understand there is a lot of season left.”

Faircloth said his team rallied behind the seniors on Monday to get past the latest loss to the Bulldogs.

“We have a game this week. We have a tough game at The Butch against Ozen. That will get your attention pretty quickly. Nobody in our district has time to feel sorry for themselves. You look at your next opponent. We have to go back to having good practices and be ready to play on Friday night.”

Ozen was quick to grab Faircloth’s attention because the Panthers offense ranks second in District 22-5A. The Panthers average 441.2 yards per game.

Leading the way for Ozen is junior running back Calvin Tyler. He is the district’s top rusher with 1,197 yards on 145 carries with 16 touchdowns.

“He is a great player,” Faircloth said. “They have a really good offensive line in front of him. He is a complete player who can also catch the football out of the backfield.”

Josh Boyd is a three-year starter at quarterback for the Panthers. He has thrown for 1,242 yards on 70-of-121 passing with 10 touchdowns and five interceptions. Boyd has rushed for 363 yards on 76 carries with two scores.

“Josh is a true dual-threat quarterback,” Faircloth said. “We’ve had to play against him since his sophomore year. He is also on their basketball team. He is probably the greatest athlete in our district, in my opinion. He is very talented. He has a great arm and great legs. There is a reason he gets back up, no matter how many times you hit him. He is the biggest kid on the field. He is not getting hurt when he gets hit. You have to get two or three guys on him to take him down.”