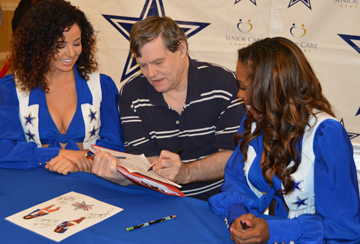 While he hopes “America’s team” will win, he’s not tuning in to see the whether Matt Cassel can prove himself on the field in the absence of Tony Romo, or whether the team can claw their way to the playoffs.

Instead, he’ll be watching the sidelines, hoping to get a glimpse of the Cowboys’ Cheerleaders, especially Nicole Bulcher and Jackie Bob.

Both were in Port Arthur Thursday where the legendary cheerleaders took time out of their busy schedules to sign autographs and take photos with residents at Cypress Glen Nursing and Rehabilitation.

Paul was among a long line of residents, staff and students from nearby schools who took advantage of the opportunity to meet members of the famed cheerleading squad.

He even presented them with a drawing of themselves that he fashioned.

“They are beautiful. I think I am in heaven and when they go, I will miss heaven,” Paul said. “They are wonderful girls, you can just tell.”

For two hours, the cheerleaders visited with the residents, while flashing sparkling smiles as friendly as fourth and 10 is long.

The cheerleaders appearance in Port Arthur was among about 350 team appearances the squad of 34 girls make annually.

“These are definitely some of the most rewarding things we do,” Cowboy cheerleader Nicole Bulcher, 28, of Twin Falls, Idaho, said. “I always enjoy Cowboy fans of different generations.”

Jackie Bob, a 32-year-old Cowboy cheerleader originally from Inglewood, Calif., said older people can always be counted on to be honest with their feelings for the Cowboys.

With the city’s close proximity to Houston, Bulcher said it was nice to see the support for the Cowboys, even in Texans territory.

While most praised the Cowboys, Milton Haney , 71, didn’t hold back when it came to his feelings for Cowboys owner Jerry Jones.

“I like the girls, I like the Cowboys, I just don’t like Jerry Jones. I think he is an a—hole; he fired the best coaches we ever had, Tom Landry and Jimmy Johnson,” Haney said.

Ed Williamson, Regional Vice President with Senior Care, the company that owns Cypress Glenn, said the Cowboys and his company have a good working relationship, and often work “hand-in-hand in Alzheimer’s projects.

On Tuesday, at the Cowboy’s golf course in Dallas, Senior Care raised $120,000 for the company’s benevolent assistance fund, which benefits company employees with serious, unexpected needs, such as a house fire.

Williamson said the company’s many facilities across the state have hosted Dallas Cowboys cheerleaders, Legends of the Cowboys such as Drew Pearson and other great players.

But, its Rowdy the team’s mascot that is most enjoyed.

“This is a good turnout today, “ Williamson said while surveying the long line waiting to meet the cheerleaders.

Last week at a facility in Corsicana, the cheerleaders signed more than 350 pictures of themselves.