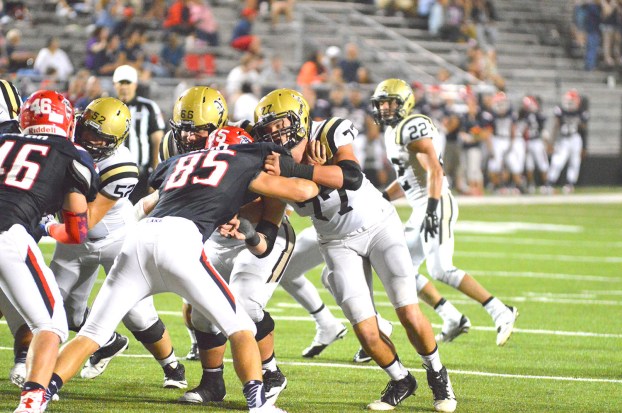 • Nederland coach Larry Neumann: “We’re not trying to forget about that great experience [that was the Bum Phillips Bowl], but I believe they’re mature enough in [Week 9] to focus on the opponent they’ve got next. And, for Baytown Lee, they haven’t won a game, but they’ve got a quarterback and tailback who score points on everybody, and this may be their playoff game. All you have to be is the best team that night.”

NEDERLAND — Justin Carr remembers what it’s like to have a letdown game.

Shortly after Nederland defeated Port Neches-Groves in 2014, the Bulldogs routed Baytown Lee by 39 points for their 29th consecutive district win. Then Goose Creek Memorial came to visit and ended the long streak with a 57-56, double-overtime win.

“We’ve basically got to work harder this week because you can’t come into it with a big head,” said Carr, a senior left tackle. “It happened to us last year against Goose Creek. You can’t let your guard down at all.”

While the Nederland-GCM rematch in Baytown isn’t for another week, guarding against a letdown is exactly the calling card for the District 22-5A-leading Bulldogs (5-2, 4-0 in 22-5A) when they host Lee (0-7, 0-4) tonight.

“We talk about coming off a big rivalry game and we’re going to prepare the same way we prepared for Port Neches,” junior right tackle Corbin Smith said.

See, the Bulldogs are just seven days removed from all the madness of their 30-27 Bum Phillips Bowl victory at Port Neches-Groves and stand all alone atop the standings for the first time this season. They’re wanting the intensity from that big win to carry over into tonight’s game at Bulldogs Stadium.

“I think our team is goal-oriented and our goal is to win the district championship,” Bulldogs coach Larry Neumann said, his team controlling its own destiny with three games left. “To not depend on anyone else, we need to win all the games, basically. So, I think that’s driving them more than anything.”

Neumann could be found in his office earlier this week studying film from Lee’s 83-54 loss at Vidor on Oct. 2. Despite all the Ganders’ struggles, they still average 30.9 points and 388.7 yards per game, the yardage just a shade behind Nederland’s 389.6.

Neumann had his eye on Lee senior quarterback Javarius Irving, who has 1,118 passing yards and nine touchdowns this year. Irving also leads the Ganders with 850 rushing yards and 11 TDs, with classmate Zavier Wright second at 674 yards and eight scores.

“They run the mid-line option, and the tailback is a good runner,” Neumann said. “The quarterback’s got some receivers he’ll throw the deep ball too.”

More importantly to Neumann, the Ganders play hard the entire game. Twice in the first two games, they were within a possession of victory.

So, he’s having the Bulldogs keep from letting the Ganders’ playmakers gain an extra step on them. Otherwise, he thinks it’ll be hard to prevent a touchdown.

That’s why their keeping preparation for tonight as focused and intense as it was for Port Neches-Groves.

“We’ve never been the kind of team that can kind of waltz out there and expect to win,” Neumann said. “We’re a blue collar-type of football team that has to work hard, get ready and value that. It’s homecoming this week, too, so that’s some motivation that we embrace. There will probably be some people there seeing us play for the first time.”