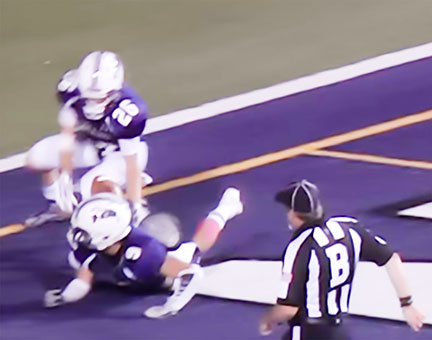 PORT NECHES — Port Neches-Groves senior safety Bryce Meche has grown used to being in the Port Arthur News.
The same goes for cornerback Cole Girouard.
This weekend, the two got to see their names on the USA Today’s website after the PN-G duo teamed up for one of the best plays seen in the history of Mid-County Madness.
Meche and the Indians trailed the Nederland Bulldogs 10-6 with just over a minute left in the first period.
The Bulldogs had the ball on the Indians 39 on a 2-and-6 and Meche at first thought Nederland would hand the ball to star running back Austin Krautz.
He might have been wrong but he was not fooled when he saw Nederland quarterback Mitchell LeBaron step back to throw.
“At first, I saw Krautz running the sweep so initially I thought Krautz was going to get the ball,” Meche said. “So, I took a step forward and then I saw (Connor) Perkins running up the side and I knew we would have to put double coverage on him to make the play.”
Meche dropped back to help cover speedy Bulldogs receiver wPerkins. He and Girouard were in the end zone and what came next was great concentration by both players.
“When I saw the ball in the air I went for the ball,” Meche added. “I thought I was going to get the interception to be honest. The ball came flying in and it hit my forearm, went on my back and into Cole’s hands.”
Meche tipped the ball and then fell on his stomach as Perkins rolled out the back of the end zone. The ball stayed in the air and bounced off Meche’s back and Girouard had slowed down enough and had awareness to grab the ball for the interception.
“I started off by seeing them fake the handoff and saw Perkins try to go deep,” Girouard said. “We put that in our practice that when Perkins goes deep, I have to go straight back in coverage. I went back with him and Bryce made a great play on the ball to start off the interception.
“I was just hoping it would be a bad pass because I was behind him (Perkins). My first reaction was to dive and go get the ball. There wasn’t any time to think about much. I just went and grabbed it. I was very surprised. I was nervous the ref would think it hit the ground but I knew it had hit Bryce’s back. I knew it was interception and was very excited.”
Girouard said it was a great feeling seeing the amount of views the video had on Youtube and how many times it had been shared on social media. The video had over 6,000 views on Youtube as of Wednesday afternoon.
“It is exciting,” Girouard said. “I didn’t think it would get that big. It was great being on state and national news. I am very proud to be a part of something like that.”