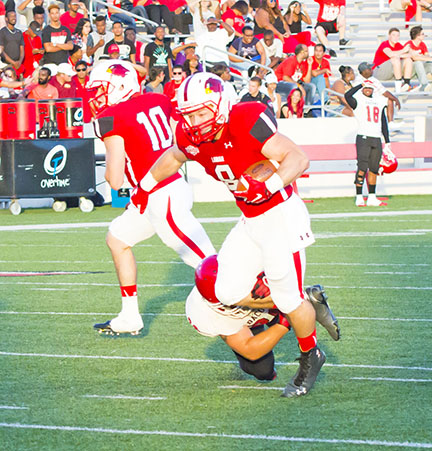 Gabriel Pruett/The News Lamar running back Kade Harrington is off to an amazing start for the Cardinals.

Lamar sports information department
BEAUMONT – Lamar University junior running back Kade Harrington has been named to the STATS FCS National Offensive Player of the Year (formerly known as the Walter Payton Award) Watch List announced STATS LLC FCS Senior Editor Craig Haley Wednesday afternoon.
“Kade Harrington is a great back and an even better person,” said LU head coach Ray Woodard. “His work ethic and his unselfish style of play is contagious. Not only is he a talented runner, he is a true leader that makes everyone around him better. This is a tremendous honor, but one that I feel is well deserved. He’s the best running back I have ever coached and I love watching him run.”
Harrington is one of 25 players named to the watch list which is revised numerous times throughout the season. Among the 25 players on the list, only nine are running backs.
A household name within the Southland Conference, Harrington is now making football fans across the country take notice of his accomplishments. A former SLC Freshman of the Year selection, Harrington currently leads the nation averaging better than 185 yards per game, and is second nationally with 13 rushing touchdowns through the team’s first six games.
Harrington already has three games of at least 200 yards this season, including an eye-popping 347 yards in a victory over Abilene Christian, which set a new Southland single-game rushing record. It was the 11th-best single-game effort in NCAA FCS history, and was among the top 36 performances in the history of Division I football.
Already this season, Harrington has recorded the first, second, fourth and 12th-best single-game rushing efforts in school history, and is coming off a 282-yard performance at Northwestern State that saw him set a school record for scoring in a game with five touchdowns.
One of only two backs at the FCS level to rush for 1,000 yards this season, Harrington accomplished it in one less game that his nearest competition. A three-time SLC Offensive Player of the Week selection, Harrington received national offensive player of the week honors after his SLC record-setting performance against ACU, and for his 230-yard effort at No. 3 Sam Houston State.
The first LU player to be nominated for the award since its creation as the Walter Payton Award, Harrington has already recorded 35 rushes of 10 yards or more, seven of 40 or longer and five of at least 55 yards this season.
Also a receiving threat coming out of the backfield, Harrington has hauled in 10 passes for 152 yards including a long of 77 in the victory at Sam Houston State.
The Cardinals return to action Saturday when they step on the field to face Central Arkansas. The game against the Bears is slated to kick off at 6 p.m. from Provost Umphrey Stadium and will be televised on ESPN College Extra.

This week we have lots of outdoor notes to whittle through pertaining to our local outdoors scene. Here goes… Saturday... read more