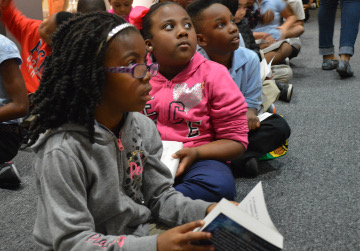 Port Arthur Rotary Club and Motiva Enterprises are building literacy one dictionary at a time.

Adams Elementary School third graders Alexi Byers, Zhackary Nguyen, Jordyn Sumbler, Kaitlyn Ballard Riyan Taylor learned first hand the difference between just searching for a word on the Internet as opposed to flipping through a dictionary and being pulled into a world of words. 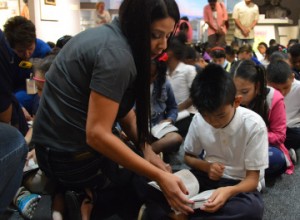 Motiva Enterprises employee Monique Maxfield, left, assists Adams Elementary School student Zhackary Nguyen as he searches for a word in his new dictionary at the Museum of the Gulf Coast on Wednesday. All third graders in Port Arthur Independent School District will receive a free dictionary courtesy of the Port Arthur Rotary Club and Motiva Enterprises.
Mary Meaux/The News

The students received the free dictionaries courtesy of the Rotary Club and Motiva while at the Museum of the Gulf Coast on Wednesday. All third graders in Port Arthur Independent School District will receive free dictionaries in the upcoming weeks.

David Beard, director of the Museum of the Gulf Coast, said the students were able to tour the museum before receiving dictionaries.

“They learn the importance of and how useful dictionaries are and why they’re better then the Internet to find a word,” Beard said. “With the Internet you search and find the word but with a dictionary you find other words along the way.”

Rotarian Libby Arnold pointed out that there is a seal on the dictionaries of the Rotary’s Four Way Test of the things we think, say and do that applies not just to school but life in general. “Is it the truth? Is it fair to all concerned? Will it build goodwill and better friendships? Will it be beneficial to all concerned?

“Not only is this (event) about the dictionaries and the importance of literacy but a way to live their life,” Arnold said. 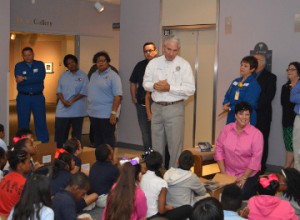 Verna Rutherford, Motiva Enterprises spokesperson, introduced a number of Motiva employees who were on scene to assist the students.

“You’re probably wondering why these people are here to help,” Rutherford said. “It’s because they care about you and want you to have the very best education you can.”