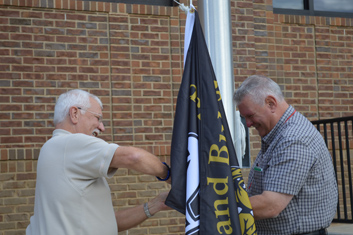 The black and gold flags Bulldogs flags seemed a bit out of place in Port Neches-Groves’ purple and white Indians territory.

Nederland Police Chief Darrell Bush has a long-standing annual bet with police chief’s in Port Neches and Groves during the matchup between the Bulldogs and Indians. Last Friday night’s game between the friendly rivals was a nail biter that came down to the last seconds on the clock with Nederland winning 30-27.

“It’s all in the name of good sportsmanship. I took the bet,” Reynolds said. “Maybe next year we’ll put our flag over Nederland Police Department.”

Bush has had some sort of bet with the other chiefs for at least the past 14 years he has served as chief of police. This marks the first year with the bet against Groves’ Reynolds.

“In the past it was a lunch bet but they (Port Neches and Groves chiefs at that time) thought they owed me one meal they’d split the cost of but if they won I had to buy two meals,” Bush said with a laugh. “But it’s all in the name of fun for all those kids. No one needs to hang their head over it. Most all of these kids on the football field are friends. For three hours one night a year they are enemies then go back to being best friends.”

Lemoine has fond memories of past pranks he and Bush pulled on each other all in the name of a fun rivalry. For some of the years a stuffed bulldog would go to Lemoine’s office for a year should Nederland win the game and if PN-G won the game, the dog — complete with a fake arrow through its head, would go to Bush’s office.

The stakes were upped a few years back when Bush sent a group of Nederland High School cheerleaders to Lemoine’s home in Port Neches for an early morning pep rally for their “favorite” Bulldog fan.

“He did it on a Thursday so there was time to retaliate,” Lemoine said. Lemoine went to Bush’s office, moved the furniture around and placed purple turf, purple and white balloons, brought purple and white cupcakes and cookies and placed the Indian school song, Cherokee, on Bush’s computer.

Another time some years ago Lemoine was in the parking lot around halftime during the annual game that was held in Nederland that year. He found Bush’s truck and decorated it with window paint.

The three chiefs will now continue the madness with the flag flying bet.