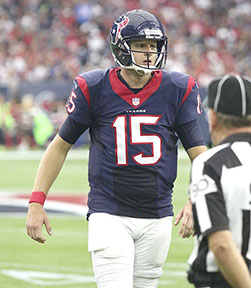 Ryan Mallett of Houston, pictured, is relegated to back-up quarterback after Brian Hoyer spurred the Texans to victory. (Michael Sudhalter/Special to The News)

HOUSTON (AP) — The Houston Texans have flip-flopped between Brian Hoyer and Ryan Mallett throughout the early part of this season.

That indecision at quarterback appears to be over now after Hoyer’s strong performance in Houston’s win over the Jaguars on Sunday.

“He’s our quarterback,” coach Bill O’Brien said. “We’re going to stick with him. He’s playing really well. He’s playing at a high level, and we’ve got a lot of confidence in him.”

Hoyer made his second start this season on Sunday and it was the first time he both started and finished a game.

He won the starting job out of camp, but was benched during the season opener after struggling early in that game. But Mallett had a tough time in his three starts and Hoyer took over in the last two of them before regaining the starting job last week.

On Sunday, Hoyer was 24 of 36 for 293 yards and tied a career high with three touchdown passes. It was the third straight game with two or more touchdown passes for Hoyer, which is the longest streak of his career.

Now that Hoyer is starting again for Houston, it’s natural to wonder if O’Brien regrets the decision to bench him so early in the season.

“I thought it was in the best interest of the team to make that decision at that time,” O’Brien said. “I don’t look back on those things, don’t regret any decisions that I’ve made as it relates to this team. I just know that Hoyer approached it very well. Brian approached it very well, like the true professional that he is.”

Hoyer did not have a turnover on Sunday and the offensive line protected him well, allowing just one sack after he was taken down four times in his first start of the season. He and the Texans will try to win consecutive games for the first time this season on Sunday when they travel to face Miami.

The Dolphins have a defensive line featuring Cameron Wake, who had four sacks and forced two fumbles before halftime in a victory over the Titans on Sunday.

“This is a very difficult defense … and they are playing at a high level right now so it will be a difficult challenge, but I think the guys on offense enjoying playing for and with Brian,” O’Brien said.

A big reason for Hoyer’s success on Sunday was the continued strong play of DeAndre Hopkins, who leads the NFL with 726 yards receiving. He had 10 receptions for 148 yards against Jacksonville to become the first player in NFL history to have at least nine catches and 145 yards receiving in three straight games.

Hopkins caught touchdown passes on two consecutive drives in the fourth quarter to secure the victory. O’Brien has been impressed with the fact that Hoyer has continued to find him despite different plans to stop him.

“Sometimes they do double him but we try to move them around so you can’t get a beat on where he is,” O’Brien said. “I think Brian’s done a good job of understanding the coverage in yesterday’s game and knowing when he could get him the ball and when he couldn’t get him the ball … those two guys have developed a good connection.”

Left tackle Duane Brown has enjoyed watching the chemistry between Hopkins and Hoyer develop and knows it will only get better as Hoyer plays more.

“They are definitely clicking, man,” Brown said. “Hoyer has done a great job not just with DeAndre, but with all of the receivers, the tight ends, the backs being able to click and get on the same page and get in sync. The connection they have is unbelievable.”