Gardner behind effort to bring NAACP back to Port Arthur 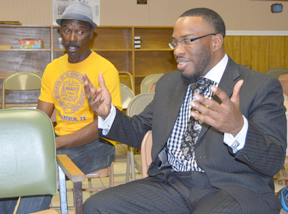 On any given day the 30-year-old Port Arthur native can be found at New Hope Baptist Church, where he is youth pastor; at his job working as respiratory therapist, coaching pee wee football, or, involved in the most recent endeavor he spearheaded — bringing the NAACP back to Port Arthur.

Gardner serves as president of the local chapter, which, after a near 10-year lapse in the city, started anew in March.

Though the national group, dedicated to ensuring equal rights of all persons and to eliminate race-based discrimination, once had a strong presence in Port Arthur, membership waned after the death of local civil rights leader Amos Evans about 10 years ago to the point where the group disbanded.

Gardner is a part of a new generation of Port Arthurians working to make a difference in their city, longtime NAACP member Clay Roy, said.

“A few months ago, our young generation approached the older generation saying they were concerned about the direction the city was going,” Roy said.

The younger generation had realized that what was going on in our nation, our state, could happen here and wanted to take steps to make sure Port Arthur did not find itself in the news for the wrong reasons, Roy said.

Led by Gardner, the young Port Arthurians got busy and re-organized the NAACP.

“Because we, the older ones, did not take the sloth off soon enough, the youngsters took the opportunity to bring it back,” Roy said. “The old song, ‘Glory,’ says we need the wisdom of the elders and the energy of the young people, and that’s the correlation between where we were and where we are today.”

When the group started looking for a president, Roy said, they all looked at the person who had led the reorganization effort.

“He had the heart, the zeal. His desire was to make an impact with this organization. He stuck at it, he was committed,” Roy said.

When Gardner’s name came up for the president’s position, he said he was at first shocked and thought someone else could do a better job.

“I really just wanted to get it organized and back and up and running,” Gardner said.

Since he was picked to lead the group, the Port Arthur NAACP has grown to more than 100 members while its mission has crystalized.

“Our focus today is about 80 percent in our community: bettering our students, bettering education, cleaning up the city and ridding the city of drugs,” Gardner said. “It’s mostly about making a better Port Arthur, better than it is and better than it was.”

The group is starting with providing good information to the city’s youth —information that will benefit them.

Since re-organizing in March, the Port Arthur NAACP branch took an active role in addressing what they saw as disparaging and racially charged remarks by some members of the Port Arthur police department on social media.

The NAACP met with the city’s police department, city council and the mayor to diffuse the situation, yet be active in taking a stance against discriminatory remarks.

“The one thing we stressed to the city manager was we are just for right regardless of religion, race, gender. We are here to protect the rights of citizens,” Gardner said.

In a city filled with different cultures, Gardner said, membership in today’s NAACP is open to everyone.

“We talked to a group of parents at the PTA meeting and had a great response from the Hispanic Community, who are going to get their kids participating in the NAACP Youth Department,” Gardner said.

The local NAACP also plans to get voter registration up, and promote getting out to the polls.

Saturday marks the NAACP’s first major event, a fundraiser designed to honor those who have made a difference in their community while raising money for college scholarships.

Four Port Arthur residents will be honored for the work they do in the community, including Marjorie Cole, Dr. Mark Porterie for education, and James Gamble and Hargie Faye Savoy for lifetime achievement.

The guest speaker is the Rev. Randy Vaughn.