Wideouts star for Texans, Jaguars, but not winning 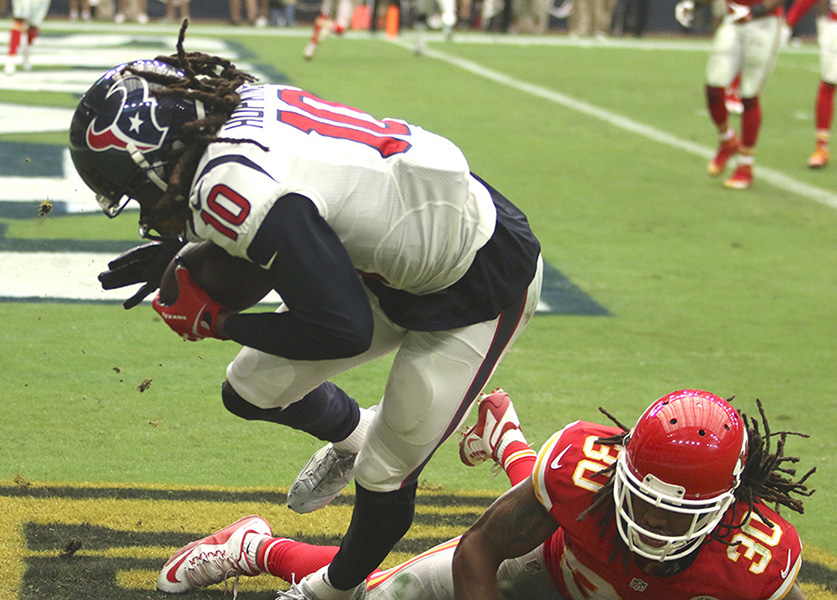 DeAndre Hopkins has 578 receiving yards and three touchdowns for the Texans this season. (Michael Sudhalter/Special to The News)

JACKSONVILLE, Fla. (AP) — Houston and Jacksonville have more in common than last place in the AFC South.

The Texans and Jaguars have a few of the most dynamic young receivers in the league. Houston’s DeAndre Hopkins leads the NFL in receiving yards. Jacksonville’s Allen Hurns and Allen Robinson have the second-most yards of any receiver duo in the league.

All three will share the spotlight today when the Jaguars (1-4) host the Texans (1-4), a game that will decide the division’s early-season cellar dweller.

Neither team is where it hoped to be offensively. Houston started the season without running back Arian Foster and has changed starting quarterbacks twice already, going from Brian Hoyer to Ryan Mallett and then back to Hoyer last week. The Texans also have trailed at halftime in every game this season.

The receivers have been the offensive bright spots.

Hopkins has three consecutive 100-yard games, one shy of tying Andre Johnson’s franchise record set in 2008. The third-year pro from Clemson has been targeted 75 times — 17 more than second-place Julio Jones of Atlanta — and tops the league with 578 yards receiving, ranks second with 42 catches.

Hurns and Robinson have been equally dependable for Jacksonville.

Hurns has 27 receptions for 430 yards and three touchdowns, one in each of the last three games. Robinson has 22 catches for 402 yards and four scores. Only Denver’s Demaryius Thomas and Emmanuel Sanders have combined for more yards (834).

“I think the two of those guys are a really good tandem,” Jaguars offensive coordinator Greg Olson said. “If you look across the league, what A-Rob and Hurns have done has been impressive for two second-year players.”

Hurns has been the most surprising of the three since he was an undrafted free agent in 2014. Hopkins was the 27th overall pick in the 2013 draft. Robinson was drafted 61st overall in 2014.

Hurns, meanwhile, had to earn a roster spot long before he landed a starting role.

“I’ve been extremely pleased with him and his development,” Olson said. “It wouldn’t be beyond the realm that he could take over that role full time.”

Here are some other things to know about Houston and Jacksonville as they play for the 27th time in 14 years:

Texans receiver Cecil Shorts III returns to Jacksonville for the first time since leaving the team that drafted him. Shorts missed last week’s game against Indianapolis because of a shoulder injury, but he returned to practice this week and expects to play.

“I had some good years in Jacksonville, so it will be fun to go back there and play against them guys,” said Shorts, who has 22 receptions for 236 yards and a touchdown.

He posted 176 receptions for 2,343 yards and 12 touchdowns in Jacksonville, but couldn’t stay healthy and wasn’t part of the franchise’s rebuilding plan.

Texans star J.J. Watt has downright dominated the Jaguars and quarterback Blake Bortles. Watt has 11½ sacks against Jacksonville in eight games, including six against Bortles last season. It might help the Jaguars knowing that Watt has mostly lined up in the same spot this season.

“They have the potential to move him at any time because he can play anywhere up front, so we’re prepared for that,” Bortles said.

“I was a little emotional,” he said. “I don’t want to take away from the positive things that we’re seeing. There’s development of a lot of things taking place and we’ve just got to do it as a team and put it together.”

The Texans have won seven of the last nine in the series, including three of the last four in Jacksonville. Houston has six road wins against the Jaguars, the most in franchise history against any one opponent.