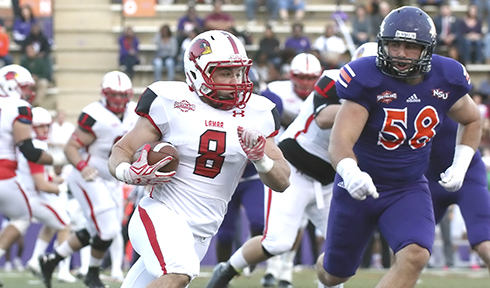 Harrington recorded another stellar performance for the Cardinals (3-3, 2-2 Southland) who fell behind by 17 points to start the game and never recovered. He recorded his third 200-yard rushing game of the season, surpassed 1,000 rushing yards for the year, set an LU single-game record for points and is now one game shy of tying the LU school record for consecutive 100-yard rushing performances.

The Cardinals outgained their hosts, 495-479, but were hurt by nine penalties and one costly turnover which led to a 14-point swing early in the fourth and took momentum away from the Red and White.

“We killed ourselves with too many penalties and too many negative plays,” said LU head coach Ray Woodard. “But Northwestern State had a lot to do with that. You can’t take away from their performance tonight. We deserve to get beat. We didn’t play well enough to win.”

The Demons came out fired up from the opening kickoff and built a 17-0 lead. Northwestern State scored on the opening drive game to take the first lead. The play was setup by a 39-yard completion on the first play from scrimmage and a pass interference against LU in the end zone. It was one of four pass interference calls against LU on the night, including two in the end zone.

Following the score, defenses on both sides turned up the pressure. LU was forced to punt twice, while freshman Rodney Randle thwarted a Demon drive with his third interception of the season. The Cards were unable to convert following the pick and turned the ball over on downs.

The Demons took advantage of Big Red’s inability to move the ball when De’Mard Llorens scored on a 53-yard run to give the home team a 14-0 lead. The Demons would tack on a field goal before LU would answer.

Northwestern State outgained the cards 208-23 in the opening quarter, including 127 yards on the ground.

The Cards dented the scoreboard at the start of the second quarter when junior Kade Harrington took the ball from his own 21-yard line, made one defender miss, and carried it 79 yards for the touchdown, but the rest of the half would see both team exchange touchdowns.

Northwestern State answered back nearly 5 minutes later with Shakeir Ryan hauled in a 22-yard pass from Stephen Rivers to build the deficit back to 17 points. Big Red was back on the attack again 78 seconds later when Harrington scored the second of his two first-half touchdowns on a 5-yard run.

The Cardinals defense stopped a Northwestern State drive and forced the Demons to punt the ball away with less than six minutes on the clock, but LU was unable to move the Ball. Northwestern State made the Cards pay by driving the ball down inside the LU 10 yard line and scored on a two-yard pass with 13 seconds remaining in the half.

LU could manage only 182 yards of total offense in the opening 30 minutes, led by Harrington’s 148 yards on 14 carries. Northwestern State recorded 347 yards of offense in the first half, including 192 on the ground.

The Cards opened the second half with a six-play, 65-yard drive that ended with a Harrington two-yard run for a touchdown. It was Harrington’s third touchdown of the night. After a Demon field goal, the Cardinals were on the move driving the ball down inside the Northwestern State 10-yard line. But disaster hit on the second down play as Harrington fumbled the ball trying to make a move and it was recovered by Adam Jones who returned it 95 yards for the score. The TD gave NSU a 40-21 lead less than a minute into the fourth quarter.

Following an unsportsmanlike conduct against the Demons, NSU was forced to kick off from its own 20 yard line. The Cardinals got the ball on a short field, and Harrington made Northwestern State pay seven plays later when he scored from three yards out. It was Harrington’s fourth touchdown of the night which tied a single-game school record for points (24). The score cut the deficit to 41-28 with 11:36 remaining but the Demons tacked on another score just over three minutes later. Harrington closed out the scoring with his fifth touchdown run of the night – a two-yard run with just under six minutes remaining.

Senior Joe Minden completed 13-of-25 (.520) passes for 195 yards. Classmate Reggie Begelton caught a team-high five passes for 61 yards, while Devonn Brown recorded his second 100-yard receiving game of the season. He had three receptions for 108 yards.

The Cardinals return to action Saturday when they host Central Arkansas at Provost Umphrey Stadium. The game against the Bears will kick off at 6 p.m.