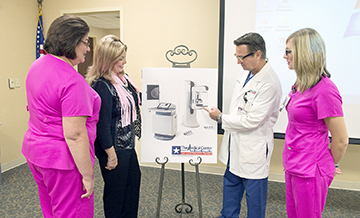 The pink balloons and festive decorations in the auditorium softened the seriousness of the topic as The Medical Center of Southeast Texas staff unveiled new technology that can improve the odds of beating breast cancer.

“Mammograms are vital every year for someone over the age of 40,” Dr. Gus Padron, medical director of radiology, told several dozen people in attendance at Thursday’s open house breakfast at which a new 3D Mammography service now offered by the hospital was introduced.

The 3D Mammography, officially known as tomosynthesis, is similar to a traditional mammogram. During a 3D exam, multiple, low-dose images of the breast are taken at different angles. These images are then used to produce a series of one-millimeter thick slices that can be viewed as a 3D reconstruction of the breast.

“Breast cancer affects 300,000 women a year,” Dr. Padron said, emphasizing the importance of mammograms. “Forty-thousand women a year die from it, second only to lung cancer. About one in eight women, 12 percent, will be diagnosed with breast cancer in their lifetime.”

By offering women the latest and more accurate technology in mammography, The Medical Center of Southeast Texas expects to increase the number of Southeast Texas women who will be routinely screened, information supplied by the hospital said. If breast cancer is detected early, the five-year survival rate is 98 percent, according to the American Cancer Society.

“The new technology is covered by Medicare,” Dr. Padrone said. Not all private party insurance companies cover the treatment, but “it’s worth every penny” if a patient pays out of pocket, he said. The cost above a traditional mammogram is $77 for the scanning at The Medical Center and about $50 for the extra readings by a radiologist. For more information, contact The Medical Center at 724-7389.

The traveling Bum Phillips Bowl trophy returned to Nederland High School on Wednesday, where it has been since last year’s... read more