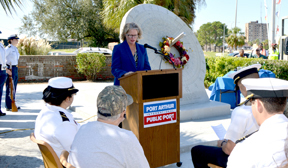 Port Arthur mourned the deaths of the crew of the S/S El Faro Friday during a memorial service for the cargo ship lost at sea Oct. 1 after losing propulsion during Hurricane Joaquin.

The service, at the Seamen’s Memorial Equatorial Sundial in downtown Port Arthur, was fitting for a ship with a history in Port Arthur,

The ill-fated cargo ship was en route from Jacksonville, Fla., and bound for Puerto Rico on Sept. 20 when it ran afoul of the Category 3 hurricane.

The U.S. Coast Guard, the U.S. Air Force, Air National Guar and the U.S. Navy declared the 33-member crew and the ship lost after an extensive search.

“You may ask why in Port Arthur, Texas are we doing a memorial for the El Faro which was sailing from Jacksonville to San Juan?” the Rev. Sinclair Oubre, apostleship of the Sea – Beaumont, said.

Both Jacksonville and Port Arthur are port cities, and have a long history with ships navigating waterways, Oubre said.

In 1971, the S/S Texaco – Oklahoma sank while en route from Port Arthur to Boston. Only 13 of the 44 officers and crewmen on board survived.

In 1963, the tanker ship S/S Marine Sulphur Queen disappeared near the southern coast of Florida taking the lives of 39 crewmen.

“Even more so, the El Faro called here a number of times when doing military turns here and Beaumont,” Oubre said. “We are all joined together because most of us are people of the sea.”

Brian Hill, representing the U.S. Maritime Administration, said U.S. merchant marines work in an industry that takes them away from home and puts them in harm’s way.

Kathy Bracken, representing the American Maritime Officers, said some comfort had been received from the President, U.S. Congress, labor unions, shipping companies and ships around the world sending condolences.

“We are not alone in mourning our lost crew. The maritime community has rallied to help us as we do our best to make our way,” Bracken said.

As part of the memorial, each of the 33 El Faro crew members’ names was read.

At the service’s conclusion, those in attendance placed flowers in vases to mark the somber occasion and toasted to the ship’s crew.