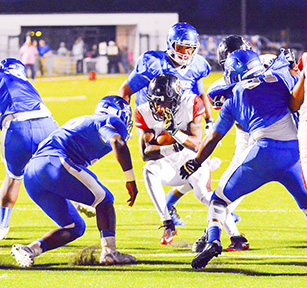 Kameron Martin has taken advantage of holes by the Memorial offensive line, which was under the tutelage of the late John Clayton Jr. (Gabriel Pruett/The News)

• La Porte coach Jeff LaReau: “This has turned into a good little rivalry. We expect a good game as always. They [Titans] are very explosive and athletic. They have several times who are very shifty and fast. Memorial has a big offensive line and on defense they are solid. They are smaller on defense than in the past but they play very hard. My guys have started to gel over the last several weeks. I hope we continue to do that because we have what we call ‘Murderer’s Row’ left on our schedule with Memorial, West Brook, North Shore and Channelview still to play. We have to come out of each of those games healthy and be able to line up our starters the following week.”

• Memorial coach Kenny Harrison: “Kadon [Harrison] is feeling well. He has his strength back. [De’Andre] Angelle came in and did a tremendous job last week. We will play both of those guys this week at quarterback. Our kids understand the season is not over. They know if we win this game, we are right back in the middle of things. When we play a full 48 minutes, we are one of the best teams in the district. That is what we have been focused on this week. I feel when we do that we can beat anyone.”

If the Port Arthur Memorial Titans are going to make the playoffs this year, this week is crucial to that goal.

The Titans welcome the La Porte Bulldogs to Memorial Stadium for another big District 21-6A game.

Memorial comes into the contest after a very emotional weekend. The Titans defeated Baytown Sterling, 27-22, last Thursday and less than 48 hours later the team learned the news offensive line coach John Clayton Jr. had passed away.

“It still feels good coming in after a win,” Memorial coach Kenny Harrison said. “We were fortunate to come out with a district win because those are hard to come by.”

“The excitement from the win didn’t last too long,” Harrison said. “We got hit with that news Saturday. The kids came in and we met about it and we are going to dedicate the rest of the season to Coach Clayton. I think the kids have gone about their business the right way. We had an extended team meeting to address some things. Our kids needed to understand life and how things happen that are out of our control. We needed to learn how to move

forward from this. The biggest thing is playing in Coach Clayton’s honor. That has been the approach.”

The Titans will need to focus on Friday’s opponent because the Bulldogs enter the game tied for the district lead with North Shore at 2-0.

La Porte has the district’s fourth best offense and leads the league in total defense. The Bulldogs allow 19.7 points per game.

The Bulldogs have three of the top 15 rushers in the district with junior running back Cobra Jones leading the way with 603 yards on 79 carries.

Quarterback Austin Upshaw is known more to run than throw with 88 carries and only 41 pass attempts. He has run for 563 yards and thrown passed for 322 with a total of 13 touchdowns.

“We have had our battles over the last couple of years,” Harrison said. “It is always a very physical game. I have told our players we have to do three things to beat La Porte. We have to play physical, play hard and play fast. If we do that, we will be in a position to win the game. Those are the three things La Porte does well. We have to match that. Our kids will be focused and ready to go.”

West Orange-Stark gets on hot roll once again

By Tom Halliburton The News correspondent Every year the challenge remains, and every year West Orange-Stark seems to have the... read more