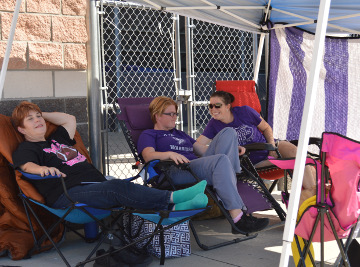 Susan Bean, Kristen Esquivel and Dolores Turpen camp out for a chance to buy tickets for Friday night’s match-up between the Port Neches-Groves Indians and Nederland Bulldogs. Mary Meaux/The News

PORT NECHES — Seated beneath canopies in the shadow of Port Neches-Groves’ Indian Stadium were a handful of fans camping out for a chance to purchase tickets for the upcoming matchup between the Indians and rivals, the Nederland Bulldogs.

By 3 p.m. Wednesday the group numbered around nine with many more expected to arrive. Susan Bean, Kristen Esquivel and Dolores Turpen were the first three to set up camp for a chance at some of the 880 general admission tickets to be sold beginning at 7 a.m. Thursday.

“We brought books, iPads and we’re women, we’ll talk,” Bean said of how the trio will pass the time while waiting for the ticket office to open. “Last year there was a group of four people who made a circle and played cards. Some police (officers) came by and brought cocoa and doughnuts and Chick-fil-A brought some food.”

The die hard Indian fans each had reasons to stay the night — some of which started the long wait at 10:30 a.m. Turpen and Esquival wanted to get tickets so they can bring their children to the game and Bean, who is Esquivel’s mom, was there for family as well.

Not far away Elizabeth Dodson and Cory LaLonde were also in line and had arrived around 1:30 p.m. LaLonde has just gotten off a graveyard shift and hadn’t been to sleep yet. His son, Lance LaLonde plays on the team, he added.

Dustin Richardson arrived and began placing his folding chairs out in preparation for the camp out.
“I have season tickets but I’m in line for one more,” Richardson said, adding one of the to-be-purchased tickets is for his girlfriend and the other for a friend of his sister.

As the crowd began to grow Amanda Delcambre, secretary at the high school, went to the ticket booth and began placing signs with instructions for the ticket sales. ‘Tickets are $6 each and there is a six ticket limit per person. Student tickets are sold out. Employee passes, purple cards and player passes will not be accepted. Everyone who attends the game must purchase a ticket.’ 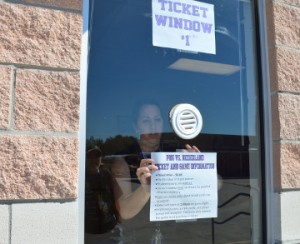 Over in the administration building Sue Cappadonna and Becky Romero were mentally preparing for the ticket sales rush.

“Last year we sold out in seven or eight minutes but we played at Nederland and only had 70 to sell and each person could get six tickets,” Cappadonna said.

The stadium, also called The Reservation, has 4,586 reserved seats and 880 general admission seats up for grabs.
The visitor’s side has 2,918 reserved seats with a total of 3,782 seats. Tickets for the Nederland Bulldog’s side were sold out on Tuesday. 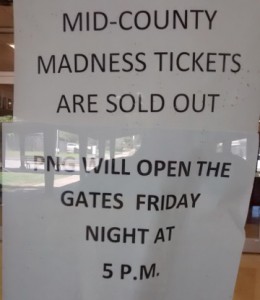 A sign on the front door at Nederland High School shows all NHS tickets are sold out.
Mary Meaux/The News

There will be a select group of folks lined up along the end zone this year — members of the 1975 PN-G football and their spouses, Romero said.

The winner of the Mid County Madness game not only wins bragging rights but the Bum Phillips Bowl trophy as well, which will be presented to the winners post game.