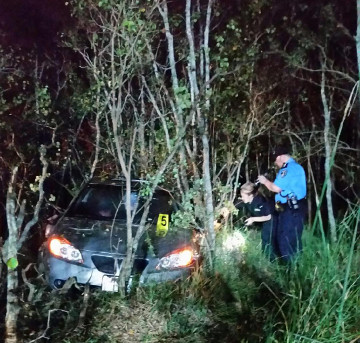 Port Arthur Police investigate the scene of a wreck and shooting in the 1800 block of west Texas 73 late Monday night. Courtesy photo

A Port Arthur woman who was a passenger in a car that crashed into a wooded area and was then shot in the head Monday night is expected to survive.

The 46-year-old female called police shortly after 10 p.m. Oct. 12 reporting she had been shot. Initially she did not know her location but was able to give enough information which led officers to find her in the 1800 block of west Texas 73. Police arrived and found her suffering from a gunshot wound to the forehead.

Officers learned the woman had been a passenger in a car that crashed at that location.

A short time later, investigators were able to locate two other people that were believed to be riding in the vehicle when the accident occurred. One of those individuals, Terence Zachary Killingsworth, 26, of Port Arthur, was arrested for aggravated assault with a deadly weapon.

The incident remains under investigation.