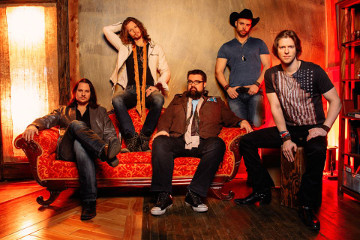 NEDERLAND — Nederland native Tim Foust is all about that bass; his fellow Home Free band members take on the rest of the singing styles.

The a cappella country music vocal group is heading to Nederland’s Performing Arts Center for a performance on Thursday where a portion of the proceeds from the concert benefit the Nederland High School choir.

Home Free were the winners of season four of The Sing Off on NBC and the five-men group have been touring every since.

“They performed at the Grand Ole Opry in July and received three standing ovations, which is very unusual,” Dena Foust, Tim’s mother, said. “It was very exciting.”

The group also released a video with the Oak Ridge Boys performing the song, Elvira. The song, she added, will be included on Home Free’s new album, Country Evolution. Copies of the album will be on sale during the concert.

Home Free has collaborated with the Charlie Daniels Band, which is also on the new album and Home Free will be featured on Kenny Roger’s Christmas album.

The upcoming Nederland performance will be the fourth hometown concert.

Renee Kloes, Nederland High School choir director who worked with Foust some years back, is proud and grateful.

“We appreciate all they (Home Free) does, especially with the fact all these guys are from small towns. They haven’t forgotten their roots,” Kloes said. “They’re just a nice bunch of guys who remember where they came from and the people who helped them along the way and we’re certainly honored to have them come back.”

NHS choir students will act as ushers and ticket takers during the event.

Jacquet has passion for success