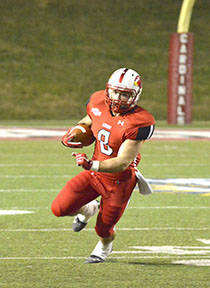 In that time span, the stellar Lamar junior shattered school and Southland Conference records for single-game rushing yards and, in the aftermath of it all, earned two national awards and his third Southland Offensive Player of the Week award this season.

On Sunday, Harrington was named the College Football Performance Awards National Offensive Performer of the Week, the news coming not 24 hours after Harrington wrapped up a 28-carry, 347-yard night in Lamar’s 44-28 win over Abilene Christian in Beaumont.

Harrington dished out his own praises after Saturday’s game — to the offensive line.

“This is, by far, the best O-line I’ve ever run behind in my entire career,” Harrington said. “I played a lot of years.

“I’ve always said, it’s easy to run straight when it’s a track meet. It’s easy to run when there’s a hole to run through. And I owe all of this to them. They’re the best group of guys.”

With an 80-yard touchdown run in the second quarter to his credit, Harrington sprinted for 62 more to give the Cardinals a 41-21 lead with 11:05 left in the game. The latter run gave him 296 yards, beating the school record of 259 by Burton Murchison against Rice in 1985.

One minute, 32 seconds of game time later, Harrington had shattered Claude Mathis’ 1996 record of 310 yards for Texas State (then Southwest Texas State) against Stephen F. Austin. He did it gaining 26 yards on a carry.

“When you know you have an O-line that’s going to sell out every single play for you, they’re going to give it their all no matter what, it makes you run that much harder. It makes it that much easier and that much more fun when you have that unity on offense. It’s a kid’s game that we’re going to play at 20, 21 years old, and I’m loving it.”

As if the awards aren’t enough, Harrington also can take pride in turning in the 11th-best single-game performance in Football Championship Subdivision history and 36th-best in all of NCAA Division I.

Plus, his 365 all-purpose yards set a school record he set in Lamar’s upset of No. 3 Sam Houston State last month (313). And he is tied with Sammy Carpenter, who last played for the Cards in 1954, for the program’s all-time lead in scoring with 198 points.

The victory earned Lamar 13 voting points, good for 33rd place, in the FCS Coaches’ Poll Top 25. The STATS FCS Top 25 poll was not updated as of Monday evening; Lamar would have been 31st in the previous release.

The Cardinals visit Northwestern State in Natchitoches, La., this coming Saturday, with kickoff at 6 p.m.

Southland officials have announced ESPN3.com will webcast Central Arkansas at Lamar, which kicks off at 6 p.m. on Oct. 24. The website streamed ACU vs. Lamar.