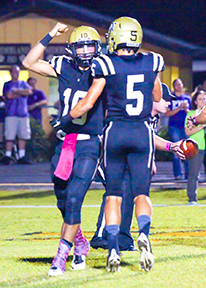 NEDERLAND — Sage Seay is quick to remember his record playing in Mid-County Madness games against the Port Neches-Groves Indians.

Seay and the Nederland Bulldogs teams he played on went 3-0 against the rival Indians.

The now-freshman linebacker at McNeese State not only won against the Indians, he played a huge role in the last two victories.

Seay in 2014 led all rushers with 115 yards on 16 carries with two touchdowns while throwing for 187 yards on 11-for-13 passing with one interception and one touchdown.

“Going into those games, it is a different feeling,” Seay said. “You prepare different. You talk different. It is an amazing feeling. That is the game you wait to play in. No offense to all the other schools on the schedule, if you are a Nederland Bulldog, you wait for Mid-County Madness.”

It is not just the players who get amped up for the game.

“Coaches are fired up all week,” Seay said. “You walk around school and everyone is talking about the game. Teachers talk about the game during class. All you want to do that week is make your city proud because the bragging rights are huge if you win.”

Do not get Seay wrong. He had many friends wearing purple and white. He would see PN-G players on the weekend. He would text them and talk with them during his high school career.

“That Friday night, I am not your friend,” Seay said. “I wanted to win. Now after the game, let’s shake hands and move on.

Both schools, win or lose, always showed a great amount of respect to each other.”

So what does Seay think about this year’s game for the Bum Phillips Bowl trophy? Of course he picked the Bulldogs to win, 21-14.

“PN-G has the talent,” Seay said. “This game always comes down to who wants it more. You look at PN-G’s roster and statistics, [and] they are a proven football team. When it comes to Mid-County Madness, you can throw all that out the window. The way Coach [Larry] Neumann teaches, you have to have fight. If you play for Neumann, there is a reason you are out there.”

As we play catch up with our bowling column, Week 4 provided a couple of bowlers with perfect 300 games.... read more