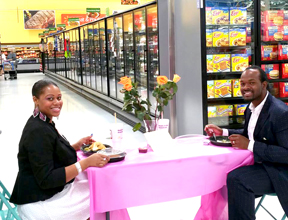 Sheri and Levi Barnes, of Port Arthur celebrate their meeting place five years ago in Walmart with a special breakfast in Aisle 5, the place their romance first started.

Sheri and Levy Barnes of Port Arthur celebrate the anniversary of their first meeting at the place they first met five years ago: Port Arthur’s Wal-Mart store on Aisle 5.

Whether it was God-ordained, or happenstance, had it not been for the lamb chops, or, perhaps a buggy full of hotdog buns, two strangers may not have met five years ago in Wal-Mart, and started dating.

As it is, Levy, 31, and Sheri Barnes, 27, not only became acquainted at the retail giant, they started dating, got married and now have two young sons.

This last week, the Port Arthur couple celebrated their fifth year anniversary, not of their wedding, but of their meeting.

And where better to commemorate the event than at the place where it all started.

This past Sunday, Levy Barnes arranged a surprise for his bride of five years. He obtained permission from the Port Arthur Wal-Mart store manager to set up a table inside the store on Aisle 5, where he and his wife would eat breakfast in the same spot they met years earlier.

They both remember the meeting like it was yesterday.

“I was working for the school district as a secretary. We had a football game that evening, and my boss had asked me to go get snacks,” Sheri Barnes recalled.

They passed each other three times in the vicinity of Aisle 5, before Levy Barnes said something to the professionally dressed young lady.

“The first time we passed he was cordial, the second time the same thing. The third time he stopped because I had a big cart of hotdog buns,” she said. ‘He said, ‘Wow, you must have a lot of kids,’” Sheri Barnes said.

“She let me know real fast she didn’t have any,” he said, while admitting he may have been guilty of stereotyping Port Arthur women.

Though Levy Barnes had just moved to Port Arthur about two months before meeting his future wife in Wal-Mart, he had lived here as a child, where his mother worked in the medical field as a physicians assistant.

During that time, he’d seen a lot of single mothers come through the clinic where his mother worked, he said.

His early stay in Port Arthur did not last long. He and his mother moved back to New Orleans to care for her aging parents. After graduating high school, he attended college in Nashville before moving back to Port Arthur in August 2010 and working as an insurance adjuster.

“I did, I had a stereotype in my mind of Port Arthur people. Even after Sheri told me she did not have kids, I did not believe her,” Levy Barnes said.

For her part, Sheri Barnes was not looking for love that day in Wal-Mart when she met a clean-cut looking young man shopping for steak sauce to go with the lamb chops he was purchasing.

She had just a few months earlier got out of a relationship, and was focused on God, she said.

Once the ice was broken, Levy Barnes told his new acquaintance he had just moved here and would enjoy going to a football game — perhaps he could meet her there?

“He was dressed in a suit and very clean cut, but when he said he was from New Orleans, I was leery because of all the things I had heard about people from New Orleans.”

In spite of their first impressions, they made the date for the football game that night.

“He showed up at the game with flowers and all my co-workers said, ‘oooh, Sheri, who is that?’” she recalled.

From that first meeting the rest is history.

He proposed on bended knee on New Years Eve in downtown Dallas barely two months after the couple met on Aisle 5.

“It was crowded from all the people there. But, when he got down on one knee and people realized what he was doing, everybody backed up to give room. Everybody started screaming and shouting,” Sheri Barnes said.

Five years later, her husband is still full of surprises, she said.

“He told me the night before not to fix breakfast, that we were going out to eat before going to church,” Shari Barnes said.

She thought it was odd last Sunday when they got their breakfast from Waffle House to go, then stopped by Wal-Mart and took the food inside.

Inside the store, the workers were all smiles as the couple entered and made their way to Aisle 5.

“There was a vase with flowers, and he had written on a card, ‘I met you here five years ago on Aisle 5,’” Sheri Barnes said. “People were taking pictures; they all thought it was so sweet.”

Since the couple celebrated their anniversary on Aisle 5, they posted photos on Facebook and have received 400 “likes” the first day.

“People are sharing the photos around the country,” Levy Barnes said.

A child of divorce, Levy Barnes said he did not have a good example of a successful marriage, but he planned to provide one to his wife and children.

“You have to put Jesus first, and seek God.” he said. “Then, put each other first with respect, compassion and compromise.”

“This is it. Till death do us part,” Sheri Barnes said.