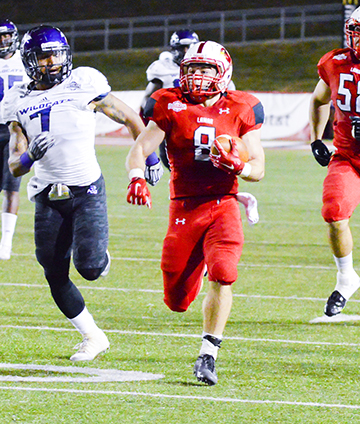 BEAUMONT — Joe Minden was good to go for just his second start at quarterback for Lamar, and he had himself a productive night.
So did Kade Harrington.
The Cardinals’ small but powerful junior running back broke two records in one night, as Lamar toppled Abilene Christian 44-28 before 13,136 in its first home game since the Sept. 5 season opener.
The 5-foot-9 Harrington ran 28 times for 347 yards, breaking a 19-year-old
Southland Conference record of 310 set by Claude Mathis of Texas State against
Stephen F. Austin. Harrington passed that mark on a 26-yard run with 9:33 left in the fourth quarter.
“Shocking,” Harrington said, still catching his breath about a half-hour after the game had ended.”
Earlier in the frame, he broke a 30-year-old Lamar record on a 62-yard touchdown run. It gave him 296 yards, topping the previous record of 259 by Burton Murchison against Rice in 1985. Harrington’s 230 yards against Sam Houston State on Sept. 19 was the most since then.
Was the most.
“You know, when you’re scoring and the offense is being productive, you’re not paying attention to any individual statistics,” Harrington said. “Our No. 1 goal is to win, bounce back from that loss last week [at Southeastern Louisiana], come out here and play with a force and get that winning momentum back.”
On this night, Harrington covered 142 of his yards on the two TD runs for the Cardinals (3-2, 2-1 Southland).
He had really made his mark early in the second quarter, when he took a handoff from Minden, scanned to his left, and darted through the left-end hole for an 80-yard touchdown run, his longest of the season.
“He’s a new man when he gets the ball,” Minden said. “He just tears defenses up.”
Minden, for his part, threw for three touchdown passes and 130 yards in his first start since the season opener. His throwing hand not fully 100 percent, he was cleared just before the Oct. 1 loss at Southeastern Louisiana after sitting out the previous two games with a hand injury.
But Carson Earp injured his shoulder at Southeastern, and Minden has taken every
Lamar snap since.
“It feels good to go out and compete for the guys,” Minden said. “We came out with a big win against a team they said we couldn’t beat in preseason.
Harrington is just 33 yards away from 1,000 for the season. His previous single season high was 880 yards as a freshman.
Minden, who completed 16 of 26, hit 10 of 15 for 84 yards in the first half and got
Lamar on the board with a 10-yard strike down the middle to Reggie Begelton, who snagged the catch in midair before a defender could touch it with 4:05 left in the opening quarter. The touchdown catch was the 20th of Begelton’s career, leaving him one behind Mark Roberts (2013-14) for the most in school history, and also gave him 198 catches overall.
Michael Handy’s 13-yard TD pass from Minden gave Lamar a 24-0 lead with 26 seconds left before halftime.
Lamar’s defense, which recovered two fumbles, did not allow Abilene Christian (2-3,
2-2) past the home team’s 39-yard line until the second half, when Cedric Gilbert went for 19 yards on a touchdown zip from Parker McKenzie to end the shutout.
The two hooked up from a yard out with 37 seconds left in the game for the final score, and McKenzie had 316 yards and three TDs on 24-of-36 passing with an interception by Rodney Randle. McKenzie had a 58-yard scoring strike to Jonathan Epps late in the third quarter.
Alex Ball converted field goals of 21, 38 and 41 yards to improve to 7 for 7 on the season.
As part of the game’s “Honoring Our Veterans,” Lamar coaches donned camouflage shirts and a fireworks show was held at halftime.