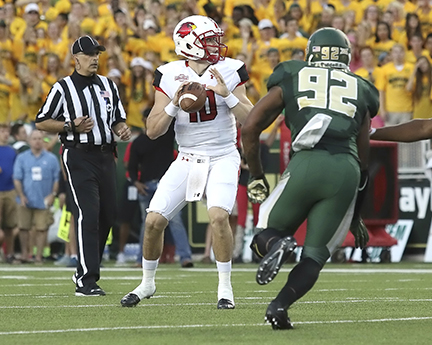 If anybody has had enough time to heal in time for Lamar’s next home game, it’s the 12th man.
“Our fans should be well-rested,” coach Ray Woodard said earlier this week. “We’ve given them a month off.”
In that time span, the Cardinals have been to Baylor, Sam Houston State and Southeastern Louisiana, appearing before television cameras and making their case for national respect, let alone victories. All three opponents have been ranked in their respective subdivisions, and today Lamar (2-2, 1-1 Southland) will end a 35-day drought of games at Provost Umphrey Stadium nearly having won two of those three games.
That alone could be cause for a big party at 16,000-seat Provost Umphrey Stadium tonight when Abilene Christian (2-2, 2-1) comes to visit. ESPN3.com will webcast the game, and Woodard has called for a packed house to showcase to the worldwide audience.
For Lamar, it’s a chance to begin a winning streak that should solidify their case for an NCAA playoff berth. Lamar will want to have a good start against an Abilene team that scored its signature victory in Division I two weeks ago at home over Stephen F. Austin, 35-32, and avoid the early hole it suffered at Southeastern.
“I keep going back and forth. On one hand, I’m very proud of how hard we fought, and on the other hand, you look at the game and all the plays,” Woodard said. “Close games are like that when you lose by three.”
The Cardinals trailed Southeastern 13-0 nine days ago but stormed back with a Reggie Begelton touchdown reception and Kade Harrington rush to lead 14-13 at halftime. The second half was a back-and-forth affair that ended with Kody Sutton’s fourth-down, 1-yard sneak with 1:19 left for the 27-23 win.
Woodard, in part, attributed the loss to Southeastern’s possession time. Lamar converted only 2 of 11 third downs to Southeastern’s 10 of 18 and had the ball for only 20 out of 60 game minutes.
“We were not very good on third down,” Woodard said. “… We need that to be around .500. We had two trips inside the 5, kicking field goals. That’s opportunities for keeping their drives alive and keeping our offense on the sideline.”
Abilene Christian is dusting itself off from a loss as well. A week after scoring a signature victory over Stephen F. Austin, the Wildcats were throttled 42-14 at Central Arkansas.
“They’re just a good, solid football team. I know they just came in a season ago, but they just already like a Southland Conference team. They’re a good-looking team on the hoof.”
Abilene’s De’Andre Brown is third in the conference with 347 rushing yards, well behind Kade Harrington’s 486 for Lamar and Loren Easly’s 363 for Stephen F. Austin. Abilene quarterback McKenzie Parker has seven touchdowns and a 62.8 percent completion rate, averaging 197.3 yards per game to rank second in the Southland.
It will be a game-time decision who will start at quarterback for the Cardinals. Earlier this week, Woodard said that Carson Earp had shoulder soreness after being knocked out in the second half at Southeastern but was feeling better by the day and was listed as day-to-day. Joe Minden, who has one start this season, replaced Earp.