PA questions answered during Coffee with the Councilman 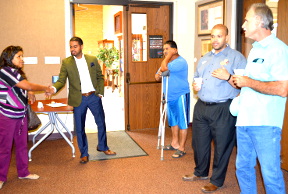 Free coffee and donuts may have lured Port Arthur residents out early to meet with their City Councilman Derrick Freeman, but within no time the topic had turned to city issues such as streets and infrastructure.

Freeman, Position 7 councilman, said the Coffee With Your Councilman event was well attended, especially since other events such as a breast cancer awareness walk and the annual CavOILcade Parade were scheduled near the same time.

About 15 to 20 people in attendance were provided the opportunity to write a concern or question on paper, which would be addressed during the Coffee.

City Manager Brian McDougal, who participated in the Breast Cancer Awareness Walk, arrived midway into the meeting to answer questions.

Freeman explained City Council’s role: not to micromanage city staff, but to set policy, he said

“Our city manager, he is the one that does the hiring and firing” Freeman said.

Freeman said Saturday’s coffee was about the eighth or ninth one, and that the frequency had slowed in previous months before McDougal came on board as city manager.

Freeman said the city’s decision to require gaming devices to be permitted has been a financial boon to city coffers. Since the ordinance was passed in March requiring each machine to be permitted, about $500,000 has been raised. Most of that money will have to be used for enforcement activities, but the general fund will still benefit from the revenue.

“You can use it to buy a new police car and do not have to use general fund money for the expenditure,” Freeman said.

In turn, the freed-up general fund dollars can be used on other things like streets and infrastructure.

When asked how he liked the new city manager, Freeman said he was doing a great job.

“The big part of what we need to do is to stay out of his way and let him do his job,” Freemans said. “I feel comfortable he is not someone that needs to be micromanaged. He’ fair and people like him. He’s got tough skin, and if we give him time, he will get some things accomplished.”

Freeman took another question: How can we as citizens get involved?

“They can do a Town Hall meeting, attend City Council meetings and organize anything themselves. The average citizen does not know they can write a grant themselves,” Freeman said.

Freeman, who is the liaison between the fire department and Neighborhood Council, said the membership is mostly elderly and needs new younger people.

“The group is getting smaller and smaller. It is a great organization for people to get involved in, but what they really need is new blood,” Free said.

Freeman said the city would be hiring a public information officer soon. The position will help generate more positive information about the city.

“There is about $3 million a year not paid by customers,” McDougal said, adding the he believed the Council was not aware the amount of money lost from delinquent water bills because of a lack of management.

Since McDougal put a person in charge of water bill collections, the number of people not paying their bill has dropped from 30 percent o 25 percent.

There is also a vast need to shore up the city’s aging water and sewer infrastructure.

“The smart meters are going in right now. We are on a fast road to recovery,” McDougal said.