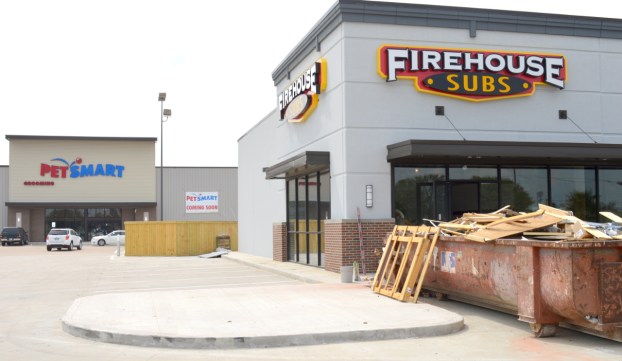 A retail development near the intersection of U.S. 69 and FM 365 is nearing completion. Retailers Chipotle Mexican Grill, Firehouse Subs, PetSmart and dental clinic Gulfside Dental are expected to open at varying times from November to January.

The signs are going up at the intersection of U.S. 69 and FM 365, signaling a retail development months in the making is getting close to completion.

In February, Houston-based developer Baker-Katz announced an expansion to the Hobby Lobby/Party City center that had opened months earlier to much fanfare.

Also included in the expansion is Gulfside Dental, and the largest of the group: PetSmart.

While PetSmart is built adjacent to Party City in an expanded 13,000 square foot space, the others will be housed in a building constructed in front of the existing Hobby Lobby and Party City retailers.

When plans were originally announced, Baker-Katz said a fourth business would be a Cash Store. That business has since pulled out of the project.

Neal Wade, partner with Baker-Katz, said the developer is in negotiations with other companies, possibly a yogurt shop to fill the 1,500 square foot vacant spot

“We are excited to be getting close to completion because we got hit with a ton of rain in the summer and the spring,” Wade said.

The first retailer expected to open its doors is PetSmart.

The 1,750 square foot eatery is the first Firehouse Subs Restaurant in Port Arthur and the first location for husband-wife duo James and Keeya Gillard. James Gillard is an active firefighter with the Beaumont Fire Department, where he has served for 23 years

Gulfside Dental, with dentist Dr. Ashley Demarco, is expected to open its 1,750 square foot building in January, according to the company’s website.

Tractor Supply is expected to have a soft opening the last weekend in January and a grand opening the following weekend.

Wade said the company’s experience with the city of Port Arthur has been very favorable.

“We are more than happy with the development, the city officials, just everybody in the whole process,” Wade said. “I have heard that Party City and Hobby Lobby have been doing extremely well. My interaction with government officials down there has been great.”

In addition to the Hobby Lobby Center expansions, developer Kerry LaGrone is planning to expand an area along U.S. 69 and the Jimmy Johnson intersection area. LaGrone plans to build another national restaurant adjacent to the existing Saltgrass Steakhouse. LaGrone, though his company PA69 L.P. also plans to expand the building that houses Conn’s and Boot Barn by another 13,260 square feet.

Port Arthur City Council on Tuesday will decide whether to approve a Port Arthur Economic Development Corporation grant in the amount of $275,000 for infrastructure storm drainage improvements associated with the expansion.

PA questions answered during Coffee with the Councilman

Free coffee and donuts may have lured Port Arthur residents out early to meet with their City Councilman Derrick... read more