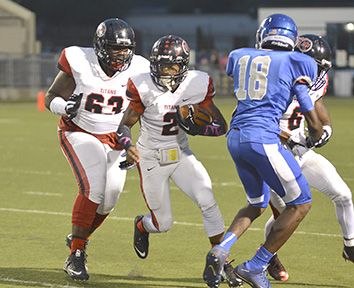 BAYTOWN – Port Arthur Memorial jumped out to an early lead behind the running game of Kameron Martin and De’Andre Angelle and held off of a late rally by Baytown Sterling to preserve a 27-22 District 21-6A win Thursday night at Stallworth Stadium.

“It was a good win for our kids,” said Memorial head coach Kenny Harrison. “Our kids have been playing hard the last couple of weeks and we came up short. It was good for our kids to come out and play hard and finally get rewarded with a win tonight. It feels good.”

The Titans offense had a decidedly different look with Angelle lined up at quarterback. He was subbing for Kadon Harrison, who did see some action in the game, but was limited due to injury.

“Kadon is not 100 percent and our plan was not to play him except in an emergency situation,” said Harrison. “We did put him in when they [Sterling] lined up in press man coverage to back them off a bit. It was our game plan to not play him at all.

“Angelle is one of the top athletes on our team and he is a run threat. He takes a lot of pressure of Kameron Martin and Marcus Younger in the backfield because you have to respect his running ability.”

Memorial (2-5, 1-2 District 21-6A) ran the ball almost exclusively with Angelle in at quarterback. He rushed for 113 yards on 14 carries. As a team, the Titans rushed for 351 yards. Memorial only attempted five passes on the night, completing three for just 7 yards.

Martin turned in another solid night, rushing for a game-high 187 yards on 16 carries. He had touchdown runs of 43 and 76 yards as the Rangers could not catch him once he got to open field. Marcus Younger chipped in 51 yards on seven totes.

“This is two weeks in a row that Kameron [Martin] has had a tremendous game,” said Harrison. “He had a tremendous game last week against Deer Park. He’s a great player, he’s our team captain, he’s been positive through these tough times we’ve had. He’s just a hard working kid. He practices just the way he plays.”

The Titans, who held a 27-6 halftime lead, were held scoreless in the second half. The Titans only had the ball for one full possession of the third quarter. After Sterling turned the ball over on downs after holding the ball for nearly six full minutes, Memorial  was unable to get a drive going after committing three straight penalties and had to punt the ball away.

The Rangers put together a scoring drive on their ensuing possession. Quarterback Matt Corbett kept the ball for a 42 yard gain on the drive’s first play. He scored four plays later on a 15-yard run. A two-point conversion run by Jaquandez Ardoin made the score 27-14 with 2:32 left in the third quarter.

Memorial responded with its best offensive possession of the second half. Martin kept the drive going with a 3-yard run on fourth-and-two and a Younger 19-yard scamper gave the Titans first-and-goal at the 8. That’s as close as Memorial would get and Raul Estupinan’s 25-yard field goal attempt was blocked.

Sterling (4-2, 0-2) used the momentum from the blocked kick to jump start another lengthy scoring drive. The Rangers converted two fourth downs to keep the drive going. Corbett connected with Xavier Curry on a 22-yard scoring strike to cap the 16-play, 70-yard drive that took 7:53. Corbett ran in the 2-point conversion to pull Sterling within 27-22 with 1:33 remaining in the game.

Memorial recovered the ensuing on-side kick. Martin ran for 20 yards on the next play from scrimmage and the Titans were able to take a knee to close out the game.

“I told our kids after the game, you win a district game and you get right back in the race to make the playoffs,” said Harrison. “We just have to take it one game at a time for the next three weeks. If we can continue to work hard and play hard we will have a chance to win those games.”

Sterling won the coin toss and elected to defer possession until the second half. Memorial gladly took the opening kickoff and marched right down the field for the game’s first score. Angelle called his own number on a quarterback keeper for an 11-yard touchdown run to give the Titans a quick 7-0 lead.

The Titans successfully recovered an on-side kick to retain possession at the Sterling 47. On the drive’s second play, Martin scampered 43 yards to put Memorial up 13-0 with 9:05 remaining in the first quarter.

Memorial turned the ball over on downs in each of its next two possessions, but the Titans defense was able to keep Sterling in check. Starting at their own 11, the Titans broke through for another score late in the second quarter. Martin took off over left tackle and raced 76 yards for a touchdown to make the score 20-0.

Sterling responded with its first scoring drive of the game on its ensuing possession. Corbett hit Curry on a middle screen for a 21-yard touchdown. That capped a nine-play, 53-yard drive to make the score 20-6 with just 25 seconds left in the half.

Memorial was done yet as Kary Vincent returned the ensuing kickoff 70 yards for a touchdown to give the Titans a 27-6 halftime lead.