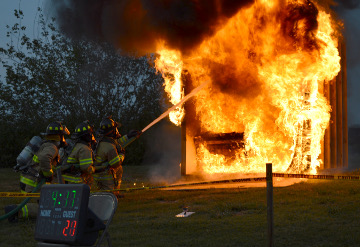 Port Neches firefighters extinguish a fire during a live burn demonstration at the department’s open house on Thursday. A nearby timer showed the structure, which was not equipped with a residential sprinkler system was fully engulfed in about four minutes. Mary Meaux/The News

PORT NECHES — Families lined up outside the Port Neches Fire Station to watch as two mock rooms were set ablaze on Thursday.

The 8 X 8 X 8 sized rooms sat side by side and each featured a couch and table with lamp; one with a TV and the other with an old computer. A small wastebasket was set on fire which quickly reached a curtain and began to spread during the residential sprinkler and smoke alarm live burn demonstration at the department’s open house.

A timer nearby ticked off the seconds until the smoke alarm went off. Within about four minutes the room with only a smoke alarm was destroyed. Firefighters waiting close by quickly extinguished the blaze. 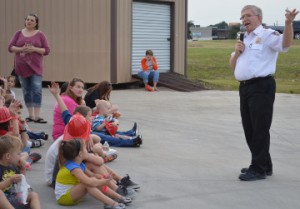 “A house can be completely on fire from a trash can within five minutes,” Curran said.

The second mock room was set ablaze with the smoke alarm sounding at around 18 seconds. By 1:06 minutes the sprinkler came on and the fire was doused.

“I encourage families to purchase residential sprinklers,” he said. 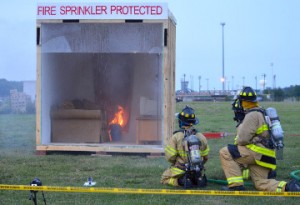 Port Neches firefighters stand guard as a fire is doused by a fire sprinkler system during a live burn demonstration at the department’s open house on Thursday. The sprinkler activated after about one minute into the blaze thus saving a majority of the room.
Mary Meaux/The News

Prior to the demonstration families walked around the recently constructed fire station looking at the fire engines, an Acadian ambulance, Nederland Fire and rescue truck and the Labelle-Fannett Volunteer Fire Department Family Safety House.

“This is great for the kids to be able to see the fire station and what firefighters do,” Saltzman said. 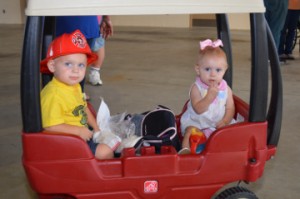 Sara Stewart of Groves brought along her children, James, 2, and Jonni Sue, who will turn 1 next week. The Stewarts have a good friend, Brandon Hoffpauir, who is a Port Neches fire fighter and they were there to support him, she added. 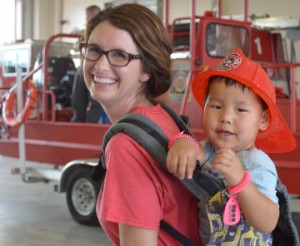 Jolie Williams and her son, Hudson Williams, 3, of Norman, Okla. were in town visiting family and stopped by the Port Neches Fire Department’s Open House on Thursday.
Mary Meaux/The News 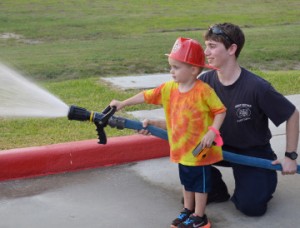 Cooking chili for a cause; Wheelhouse Chili Cook-off to benefit PNFD

PORT NECHES — There may not be a chill in the air but there will be chili in bowls on... read more