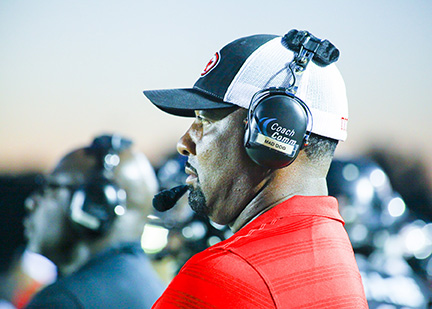 If the Port Arthur Memorial Titans are going to right the ship, tonight would be the perfect time to turn the wheel.
Memorial faces Baytown Sterling at Stallworth Stadium seeking its first District 21-6A victory since the last time the Titans faced the Rangers.
This season has not got off to the best start for Memorial. A loss tonight would be the first 1-6 start to any season since the school opened in 2002.
“Our kids have approached this week with a positive attitude,” Memorial coach Kenny Harrison said. “They understand we still control our own destinty. We have to take the rest of the season one game at a time.”
Tonight’s game offers a chance for the Titans to get back in the playoff race in District 21-6A. Sterling comes into the contest at 4-1 overall and 0-1 in the district standings.
Memorial (1-5, 0-2) defeated Sterling 28-24 in 2014 for the team’s lone district win of the season. It was an exciting game as quarterback Kadon Harrison threw a touchdown pass to Travon McClain in the waning seconds of the contest.
“It was an exciting game for people to watch but being on the sideline was a little stressful,” Harrison added. “Our kids understand our backs are against the wall. We look forward to playing a very quality opponent.”
The Titans are coming off a 45-28 loss to Deer Park. It was a humbling loss so Memorial could hardly wait to get back on the field.
“This is our second Thursday ball game so we are a little more acclimated to it,” Harrison said. “It is good to get back to playing pretty quick here.”
Harrison has kept a positive tone when speaking about his Titans no matter the 1-5 record. His players have also kept their heads held high during the tough stretch that followed a 3-7 campaign in 2014.
“The Memorial football program is a special program, always has been and always will be,” Harrison said. “These kids have pride in the program. Things just have not gone our way for one reason or another. Our kids are a great group of kids and they understand we are in this together. We win together and we lose together. We are a family.
“Our kids are plugging away to get this turned around. Everyone has bought into that motto.”
Harrison added one of the senior Titans players took a stand the other night and let his team know what it would take to start winning games.
“Kameron Martin stood up the other day and told everyone we are going to fight until the end,” Harrison said. “That was big for a young man to stand up like he did and Brandon Jackson echoed that and the team has responded.
“As I look back on some of the ball games, there were times the offense played good and the defense didn’t and others when the defense played well and the offense didn’t. It is the same with special teams. I told the team if we play a full 48 minutes in all three phases, we are one of the best football teams around. We just have to put it all together and we need to get off to a fast start on Thursday.