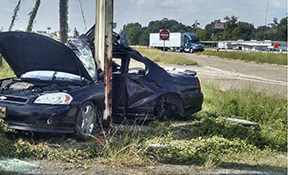 One dies in Orange County crash

At approximately 1:00 p.m. Wednesday, there was a one vehicle crash on Interstate 10 at the Simmons Drive exit in Orange County.
A 2007 Chevrolet passenger vehicle was eastbound on Interstate 10.  For an unknown reason, the driver of the Chevrolet took the Simmons Drive exit (mile marker 878) at a high rate of speed and lost control. The vehicle went down the exit ramp in a side skid, continued over a curb and struck a metal beam.
The driver, Jordan Pinchon, 23,  from Carencro, Louisiana,  was pronounced dead at the scene by Justice of the Peace Derry Dunn.  At the time of the crash, Pinchon was wearing a seatbelt.