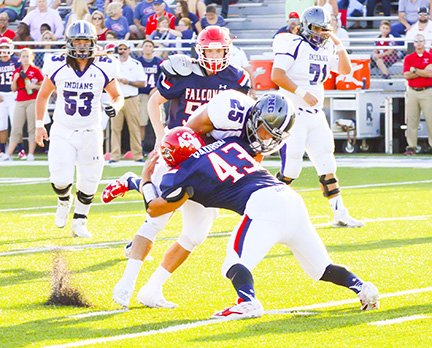 PORT NECHES — Port Neches-Groves senior Kody Cropper admires a current player at Nederland’s game.
It is strange sometimes to hear an Indians player say he wants to perform at the same level as a Bulldogs player, especially a week away from Mid County Madness.
The player’s name is Austin Krautz. Krautz is tied with Beaumont Ozen’s Calvin Tyler for the District 22-5A lead with 814 yards.
Cropper is sixth in the district with 422 yards on 61 carries with three touchdowns.
“I look at other running backs and see how they run,” Cropper said. “I want to come out and try to compare myself to them. It makes me want to run faster and run harder. Austin Krautz, (Central running back) Devwah Whaley (Lumberton running back) Tim Rhodes are guys I like watching run. Austin runs so hard and fast.”
Cropper has certainly run hard this year. It has been an easy observation to see and is easy to know why it has happened in his senior year. Cropper was injured the last two years.
“I don’t know where running hard came from this year,” Cropper said. “I started working out over the summer and tried getting some weight on me.”
Coach Brandon Faircloth said he has seen the difference in Cropper this season and has been pleased with the production No. 25 has had this season for the Indians.
“He is having a great senior year,” Faircloth said. “He is a season played with three years under his belt. He has scored a lot of touchdowns for us and he is also a very good blocker.
“He comes out and works hard every day. It is tough being a tailback. You get beat up every game and you are always sore. Kody is always a big part of our game plan.”
Cropper, like many of the other Indians, grew up in the PN-G community and dreamed of playing football at The Reservation.
“My main player I watched growing up was Chase Bertrand,” Cropper added. “I always wanted to be as good as him. It is a great feeling being on this team.”
Bertrand is not a bad hero to have for any player. In 2010, he rushed for the second most yards in any PN-G season with 1,885.
So what will it be like when Cropper steps on the field opposite of Rhodes this Friday when the Indians travel to face the Raiders?
“I have to do more than he does,” Cropper said. “I have to get more touchdowns than he does and I have to get more yards than he does.”
Cropper said the best part of being the starting tailback for the Indians is simple.
“I just love being back there and being on the field with the other guys on offense,” he added. “You have to trust your blockers and trust yourself to read which way to go. I love getting the ball.
“My goal for the rest of the season is to win the district championship and get out the first round. Once we do that, you never know how far we can go.”