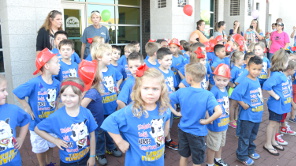 Langham Elementary students prepare to perform during a prayer rally around the flag pole during the Nederland National Night out event Tuesday.

NEDERLAND — Boston Avenue came alive Tuesday evening when residents from the city and surrounding areas came out to offer support to firefighters, police and first responders officers while enjoying a night of family fun.

This year, in lieu of the Nederland Chamber’s Business of the month, the Chamber opted to observe October as a salute to the men and women who protect and serve the city.

Nederland National Night Out, America’s Night Out Against Crime, was a time to not only have fun, but recognize those who put their lives on the line each and every day, Carrie Trahan, 33, of Port Neches said.

“I love this; think it is great that everybody gets together to show support for our law enforcement and to pray around the pole,” she said.

Trahan along with her children Moriah Trahan 2; Katelyn Bakker, 6; and Naomi Trahan, 1; attended the event for the first time.

Boston Avenue was lined not only with those coming out to show support, but also vendor booths from local businesses, police and fire, military personnel, Texas Forest Service, and many more.

Kristen Camp, 33, of Labelle, along with her children, Malachi Camp, 8; and Maeci Camp, 3; stopped by the U.S. Navy booth, where Petty officers Kemmia Flanagan and Julius Thomas provided information on their branch of the U.S. military. Both petty officers are stationed in Port Arhtur.

“We’ve come out the last two years. It’s a good family environment and the kids get to learn all about law enforcement. My son says he wants to be a soldier, but I don’t think at this point he cares which branch,” Kristen Camp said.

Members of the Jefferson County S.W.A.T. were also on hand to greet those in attendance, and to offer tours of the team’s MRAP, or Mine Resistant Ambush Protectorant.

“It’s an Army vehicle and the kids love the size of it,” Cody Corkran, 6, of Bridge City said.

Corkran is a member of the S.W.A.T. team and a sergeant with the Nederland Police Department.

“This is nice. It’s the fourth or fifth year, and it gets bigger and better every year,” he said. “Just the support in general all year is great, but especially this year in light of everything that has happened.”

Gary Porter, Nederland assistant police chief said the department has always enjoyed the support of the community, but enjoyed seeing everyone come out to support first responders.

“It means a lot for people to come out and spend time with us, to do some fun things. Nearly everybody is walking up and saying thank you for a job well done,” Porter said.