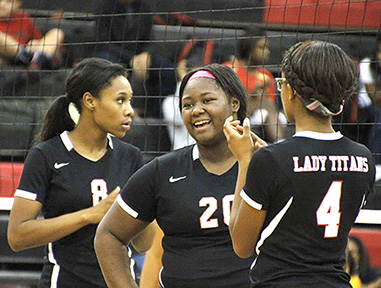 From left, Deanna Trahan, Riyah Collins and Jemiyah Dixon of Memorial clap it up after a point against Channelview on Tuesday. (I.C. Murrell/The News)

The Lady Titans have talent on the team. The talent, though, is very young. Memorial is loaded with players who do not get the work a lot of other players in District 21-6A get in the summer and spring.

Channelview swept Memorial on Tuesday to send the Lady Titans to 0-8 in the league standings.

“We are inexperienced but we are still trying to compete,” Dixon said. “This is a real growing year, and I know a lot of coaches say that, but this really is one for us.”

Memorial’s inexperience showed right from the start Tuesday. There were a lot of hitting errors that lead directly to Channelview’s victories.

Channelview’s Ebony Smith had three aces during a 6-0 run in Game 1 to spread out the lead to 16-5.

The Lady Falcons led 18-6 in Game 2 when Darrah Moore came up to serve. She struck for eight straight points to put the game away.

hitting errors in the run, five in a row. The final point came on a Moore ace.

Channelview put the match away in Game 3 as Smith hit for seven straight points and the Lady Falcons gained a 17-2 lead.

“This district is very tough. Those kids (Lady Falcons) play year round. It is pretty tough.”

Even through the struggles, Dixon has a goal in mind for the Memorial volleyball program.