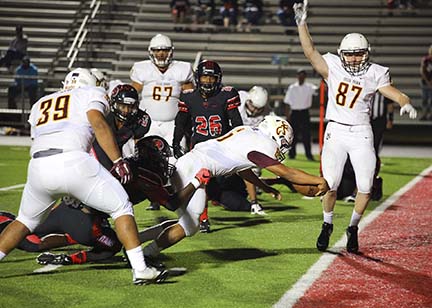 Deer Park senior Sammy Linton needed 131 yards to reach the 1,000-yard rushing mark midway through this football season. He reached that easily with seconds late in the first quarter.
Linton ended up with a career-high 307 yards and three touchdowns on 40 carries, and Port Arthur Memorial hardly had a solution for slowing him down Friday night as the Deer ran to a 45-28 victory, spoiling the Titans’ homecoming at Memorial Stadium.
“First of all, it all starts with the preparation from the Saturday recovery workout, to Monday, Tuesday, Wednesday, Thursday walk-through and then we come out here. The offensive line, every yard goes to them. Phenomenal job.”
So phenomenal, that Deer Park amassed 541 total yards.
Linton’s Memorial counterpart, Kameron Martin, had 171 yards and three touchdowns, all season highs, on 17 totes. Statistically, it was good night for the Baylor commit.
Linton, however, has no scholarship offers … yet. But District 21-6A’s leading rusher had to turn some heads in Port Arthur.
“You certainly hope somebody take notice of it,” Deer coach Chris Massey said. “He’s had some good games this year. You know, he does a heck of a job. Those O-linemen did a heck of a job.”
The Deer (3-3, 1-1 in 21-6A) ended a three-game skid that saw them lose by a combined total of 14 points. The Titans (1-5, 0-2), however, are on a four-game slide by a combined 97 points, leaving coach Kenny Harrison scrambling to find a solution for a turnaround with four games left, including a quick turnaround for a Thursday night game at Baytown Sterling.
“We’ve just got to get back to, you know, work,” Harrison said. “Can’t hold your head down on games like this. You’ve got to get ready for Sterling.”
Memorial scored its first touchdown in only three plays and 28 seconds of its first drive. Martin’s 30-yard touchdown run got all the offensive fireworks going.
He had a 65-yard dart up the middle to even the score at 14 near the end of the first quarter, but the Deer were just getting going on offense, themselves.
Linton gained his 1,009th yard of the season and 140th of the game on a 19-yard rush two plays before the end of the first quarter. He added 2 more yards to begin the second and put Deer Park back in front, 21-14.
The Deer never relinquished the lead.
Cameron Thompson threw his first interception of the year to set up Memorial’s first scoring drive and was off to a 0-for-4 start. His first completion went for 69 yards, as Logan Berryhill brought down an overhead catch and beat the Titans secondary down the Deer sideline to build a two-touchdown lead.
Memorial had only one more drive in the half reach Deer Park territory after its second touchdown. That series ended in a Cody Thompson interception and 22-yard return to midfield, setting up an eight-play scoring series ending in a Kolby Lane dive into the end zone for a 20-yard pass play with 27 seconds left.
At the break, Linton had 207 yards rushing on 22 carries.
Wide receiver De’Andre Angelle took over for Kadon Harrison under center for the Titans in the second half and scored on a 20-yard run to make it 35-21. After an Anthony Cantu field goal, Martin rushed for his third TD of the night — and of the season — from 16 yards out with 24 seconds left in the third period.
Thompson, who finished with 190 yards on 9-of-16 passing, hit Logan Berryhill from 28 yards out early in the fourth for the knockout punch. Berryhill had five receptions for 140 yards.
Angelle rushed nine times for 53 yards, but Kenny Harrison now must find out who will be available to start after a six-day turnaround with his son knocked out for the second time this season. Kadon Harrison had 66 yards on 7-of-14 passing.
“[Kadon] hurt his knee on the very first play of the game, so that’s why he couldn’t step into his throws,” Kenny Harrison said.