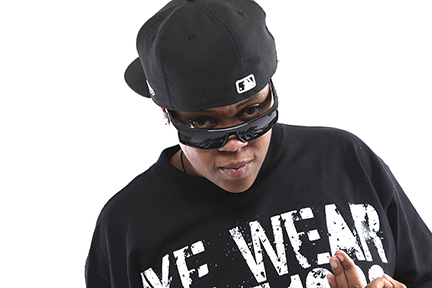 The last time the Pittsburgh Pirates won the World Series, the year was 1979 and disco music was at its height. Naturally, a disco hit — “We Are Family” by Philadelphia’s Sister Sledge — became the official rally song for the Pirates’ championship march.

“I wanted to make a theme song to make them actually want to hit the ball and make the pitcher want to strike them out,” GiGi Lavacci said. “I want them to actually want to win this World Series and go through the playoffs with no problems. This person wrote this song because she believes in them.”

Lavacci (luh-VAH-chee) — born Chastity Calcote — just released a 3-minute, 8-second rap song “Bucs Hit Em Up” as part of her first full album, four songs of which are already available on her website, www.royalmizfit.com. The cuts come just in time for the Pirates’ third straight trip to the playoffs, which begin with a one-game Wild Card battle against the National League Central Division rival Chicago Cubs at 7 p.m. Wednesday.

A victory Saturday or today against Cincinnati would give the Pirates home-field advantage for Wednesday. The Wild Card winner will play at NL Central champion St. Louis in the best-of-five division series Friday.

“Most definitely I’ll be at the [Wild Card] game,” Lavacci said.

The 1994 Thomas Jefferson High School graduate, who’s been a professional rapper since she was 18 or 19, she estimated, became a fan of the Pirates 10 years ago after she and her family moved from Hurricane Rita-ravaged Port Arthur. Her home was not lost in the storm.

“The eye of the hurricane hit [Port Arthur], so we weren’t able to come back for a while,” Lavacci said. “We ended up leaving. I think we were gone for a month. We couldn’t come back in the city. A lot of people stayed and had to stay in the city.”

Lavacci and her daughter first headed to Louisiana, which had been beaten up by Hurricane Katrina, before calling around the country looking for an area that had room for hurricane evacuees.

“Pittsburgh wasn’t packed, so we moved there,” Lavacci said. “I was in a shelter with my daughter, who was 5, I think, at the time. But I was looking for a place, and I was talking with the housing lady. She wasn’t married, didn’t have kids or any of that. She said, ‘You can stay with me until a place comes available.’ I ended up staying with the housing lady.”

Shortly after moving to the Steel City, the Pirates invited evacuees and victims of the hurricanes to the field for a home game. The team hadn’t made a playoff since dropping their second straight seven-game NL championship series to the Atlanta Braves in 1992.

“They had a losing streak,” I told everybody, ‘They’re going to start winning,’ and they were laughing. [I said] ‘God’s going to bless them.’ They planted a seed.”

The Pirates finally returned to the playoffs in 2013, winning the Wild Card game over Cincinnati but losing the NL Division Series to St. Louis. Pittsburgh lost last year’s Wild Card to San Francisco 8-0.

A full-time rapper who’s been freestyling since age 5 and writing songs since she was 10, Lavacci said she goes to Pirates games “every now and then.”

Her stage name comes from her friend Joseph Jones, who goes by Luchi Lavacci as a a rapper. Lavacci, she said, is a like a family name for his associated rappers.

“When I started, I was called Go-Getter,” GiGi Lavacci said. “So, to make Go-Getter short, I use GiGi.”

Producers for the late Biggie Smalls and Tupac Shakur have helped GiGi on past songs. Her brother Ray Hunter, aka “Ray Hunna,” and Pittsburgh rapper Diezel are producers on Lavacci’s album.

GiGi’s manager, Jesse White, said his public relations team has been in contact with the Pirates front office in hopes “Bucs Hit Em Up” will be catchy enough to become the playoff rally song for a new generation of Bucs fans. He added, however, that based on past experiences songs that he promotes tend to take on a life of its own through local radio play better than trying to sell them to executives.

“I have enough faith in GiGi’s talent that it can go places.”